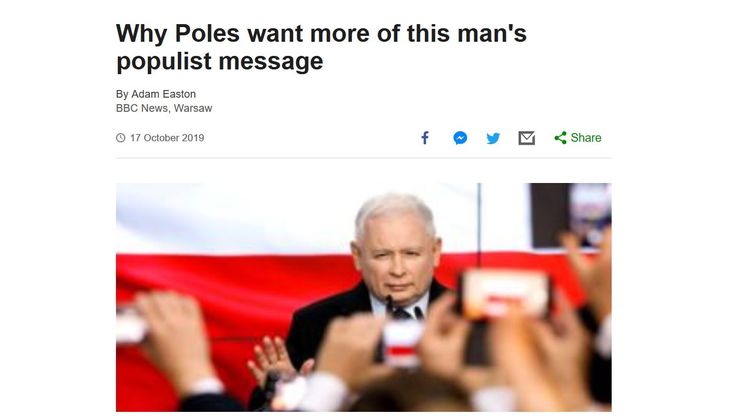 Polish Populism Is A Better Model For The American Right Than Current Conservatism, Inc. Dogma

On the one hand, the New Left radicals were (and are) openly promising to destroy the country and dismantle the culture. Though phony progressives often say working-class whites "vote against their own interests," whites don't benefit from affirmative action. Working-class Americans of all races don't benefit from wage-suppressing mass immigration, outsourcing, foreign wars, or foreign aid.

Yet, the American Right never really delivers for workers. It delivers tax cuts for companies that outsource jobs. It provides cheap labor for the Chamber of Commerce. It moves the sun and stars to implement these policies even when they are unpopular. Then, come election time, it shames patriotic workers into voting GOP by waving the flag, screaming about leftist radicalism, and championing wedge issues like flag burning (which are put back in the closet once Republicans take power).

What happens if a "right-wing" party actually delivers real, concrete benefits for its constituents? What if the appeal wasn't just symbolic?

Victory for Poland's governing Law and Justice party in parliamentary elections has turned out to be bittersweet.

Despite winning 43.6% of the vote, the largest voter share since democracy was restored 30 years ago, the party had been hoping for an even higher result and it lost control of the less powerful upper house — the Senate.

Millions of Polish families are receiving benefits to help them make ends meet and now feel for the first time there is a party that cares about their dignity.

The result also shows that the party's controversial efforts to increase political control over the judiciary, which has led opponents and the European Union to accuse it of weakening Poland's democracy, were not decisive.

The party's leader, Jaroslaw Kaczynski, widely considered to be the most powerful politician in Poland, said during the campaign it was time to change the country's political, economic and cultural elites.

Note that Polish nationalists face the same enemy that Americans do, the specter of judicial rule, of kritarchy. Note too that rule by unelected Communist judges is somehow "democracy" in the eyes of the international press.

Yet leave that aside for the moment. Is there not one prominent American conservative (aside from Tucker Carlson and Pat Buchanan) who sees the potential here? President Trump promised to turn the GOP into a Workers' Party. Instead, he turned over the legislative agenda to Paul Ryan, passed an unpopular policy agenda, was betrayed, and is now going to be impeached.

Has he learned? If not, is there not one ambitious Republican who sees what can be done? The answer will determine whether the Republican Party, or America, has a future.