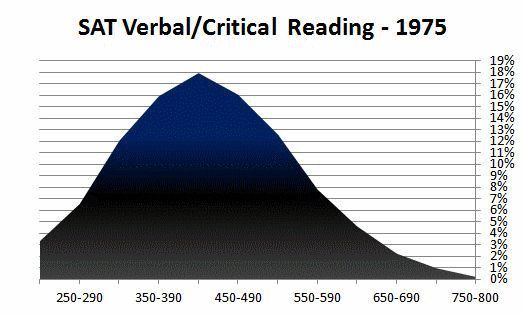 Inflating SAT/ACT Scores Makes It Easier to Let in Privileged

From Unsilenced Science, how scoring high on the SAT college admissions test has gotten much easier over time. (It would be even nicer if the two axes were held constant on these graphs over, but I shouldn’t look a gift horse in the mouth.)

The easier scoring of admissions tests makes it easier for elite universities to let in lots of legacies, jocks, and Jared Kushner-type donor’s rich kids without losing too much in the USNWR rankings.

My suggestion: Because it’s too much to expect people to put up with lowering these inflated scores, the best solution is to raise the maximum scores by a standard deviation, from 1600 to 1800 on the SAT and from 36 to 40 on the ACT. This would not be hard to do once the tests are switched from paper to on-screen and thus responsive to previous performance, like the GRE and AFQT/ASVAB are. On more modern tests, if you get a lot of questions right, the test starts asking you tougher questions.