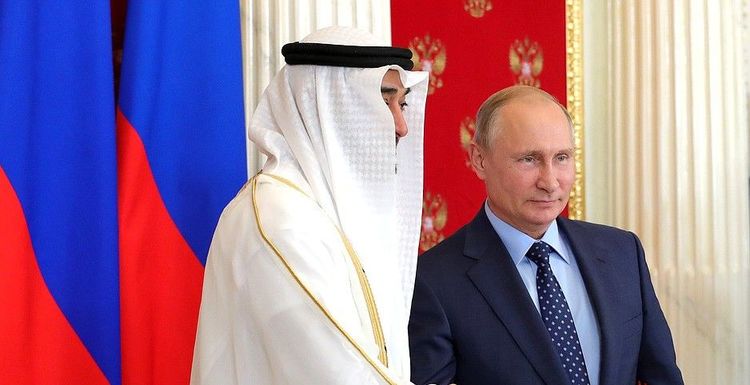 Patrick J. Buchanan: If Putin “Takes Over” Middle East, Will Russian Taxpayers Get To Fund Wars?

Earlier by Patrick J. Buchanan: Is "Invade The World" Over for Good?

"Russia's status as the undisputed power-broker in the Middle East was cemented as Vladimir Putin continued a triumphant tour of capitals traditionally allied to the US."

"Donald Trump Has Handed Putin the Middle East on a Plate" was the title of a Telegraph column. "Putin Seizes on Trump's Syria Retreat to Cement Middle East Role," said the Financial Times.

The U.S. press parroted the British: Putin is now the new master of the Mideast. And woe is us.

Before concluding that Trump's pullout of the last 1,000 U.S. troops in Syria is America's Dunkirk, some reflection is needed.

Yes, Putin has played his hand skillfully. Diplomatically, as the Brits say, the Russian president is "punching above his weight."

He gets on with everyone. He is welcomed in Iran by the Ayatollah, meets regularly with Bibi Netanyahu, is a cherished ally of Syria's Bashar Assad, and this week was being hosted by the King of Saudi Arabia and the royal rulers of the UAE. October 2019 has been a triumphal month.

Yet, consider what Putin has inherited and what his capabilities are for playing power broker of the Middle East.

He has a single naval base on the Med, Tartus, in Syria, which dates to the 1970s, and a new air base, Khmeimim, also in Syria.

The U.S. has seven NATO allies on the Med—Spain, France, Italy, Croatia, Albania, Greece and Turkey, and two on the Black Sea, Romania and Bulgaria. We have U.S. forces and bases in Afghanistan, Iraq, Bahrain, Saudi Arabia, Qatar, Oman and Djibouti. Russia has no such panoply of bases in the Middle East or Persian Gulf.

We have the world's largest economy. Russia's economy is smaller than Italy's, and not a tenth the size of ours.

And now that we are out of Syria's civil war and the Kurds have cut their deal with Damascus, consider what we have just dumped into Vladimir Putin's lap. He is now the man in the middle between Turkey and Syria.

He must bring together dictators who detest each other. There is first President Erdogan, who is demanding a 20-mile deep strip of Syrian borderland to keep the Syrian Kurds from uniting with the Turkish Kurds of the PKK. Erdogan wants the corridor to extend 280 miles, from Manbij, east of the Euphrates, all across Syria, to Iraq.

Then there is Bashar Assad, victorious in his horrific eight-year civil war, who is unlikely to cede 5,000 square miles of Syrian territory to a permanent occupation by Turkish troops.

Reconciling these seemingly irreconcilable Syrian and Turkish demands is now Putin's problem. If he can work this out, he ought to get the Nobel Prize.

"Putin is the New King of Syria," ran the op-ed headline in Thursday's Wall Street Journal.

The Syria of which Putin is now supposedly king contains Hezbollah, al-Qaida, ISIS, Iranians, Kurds, Turks on its northern border and Israelis on its Golan Heights. Five hundred thousand Syrians are dead from the civil war. Half the pre-war population has been uprooted, and millions are in exile in Turkey, Lebanon, Jordan and Europe.

If Putin wants to be king of this, and it is OK with Assad, how does that imperil the United States of America, 6,000 miles away?

Wednesday, two-thirds of the House Republicans joined Nancy Pelosi's Democrats to denounce Trump's decision to pull U.S. troops out of Syria and dissolve our alliance with the Kurds. And Republican rage over the sudden abandonment of the Kurds is understandable.

But how long does the GOP believe we should keep troops in Syria and control the northeastern quadrant of that country? If the Syrian army sought to push us out, under what authority would we wage war against a Syrian army inside Syria?

And if the Turks are determined to secure their border, should we wage war on that NATO ally to stop them? Would U.S. planes fly out of Turkey's Incirlik air base to attack Turkish soldiers fighting in Syria?

If Congress believes we have interests in Syria so vital we should be willing to go to war for them—against Syria, Turkey, Russia or Iran—why does Congress not declare those interests and authorize war to secure them?

Our foreign policy elites have used Trump's decision to bash him and parade their Churchillian credentials. But those same elites appear to lack the confidence to rally the nation to vote for a war to defend what they contend are vital American interests and defining American values.

If Putin is king of Syria, it is because he was willing to pay the price in blood and treasure to keep his Russia's toehold on the Med and save his ally Bashar Assad, who would have gone under without him.