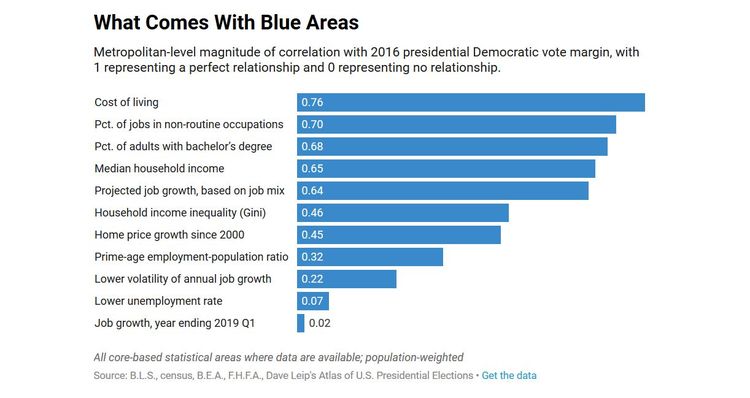 NYT: We're Getting Closer To Discovering The Concept Of Affordable Family Formation. Another 15 Years And We'll Have It!

Red and Blue Economies Are Heading in Sharply Different Directions
On the surface, there seems to be parity between Democratic-leaning and Republican-leaning metro areas, but take a closer look.

At a quick glance, red and blue metropolitan areas are performing equally well on average in the most watched indicators of labor market health.

Employment growth in the year ending in the first quarter of 2019 was 1.4 percent in both Democratic-leaning and Republican-leaning metro areas, and the unemployment rate in both types of places is roughly equivalent.

Silicon Valley (blue) is booming. So is Provo, Utah (red).

But below the surface, red and blue local economies are worlds apart on enduring, fundamental measures that determine their future prospects and their biggest economic challenges.

The correlations between deeper economic measures and how the contrasting metro areas voted in 2016 are striking.

In bluer metros, more residents have college degrees: The 10 large metros with the highest educational attainment each voted for Hillary Clinton by at least a 10-point margin. Median household incomes are higher in bluer metros even after adjusting for the cost of living, which is higher in bluer metros as well. (Metro area is a better measure for a local labor market than a neighborhood, city, county or state.) But there are a few places that vote differently than you’d expect from their local economic fundamentals. Colorado Springs and the Provo-Orem area, for instance, have education levels and an occupation mix more typical of blue metros but voted for Donald J. Trump in 2016 by a wide margin. On the flip side, Stockton, Calif., and El Paso look more like red metros economically but voted for Mrs. Clinton.

Why do some metros vote differently than their economics might suggest they would? Race, ethnicity and religion. Metros that vote Democratic despite having lower education and a job mix more typical of redder metros tend to have large Hispanic populations, including many in inland California and on the Texas border. Metros that vote more Republican despite having higher education and a blue-metro job mix tend to be whiter. (Colorado Springs also has a large evangelical population, and Provo-Orem a large Mormon one.) …