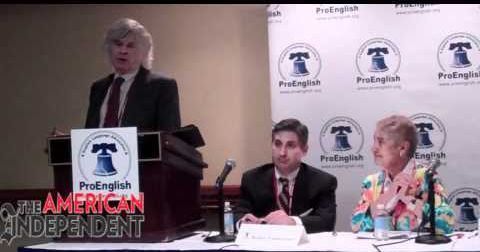 The latest of many NYT attacks on Stephen Miller (for citing us) and on us (for being attacked by the $PLC), starts:

WASHINGTON — Peter Brimelow, the founder of the anti-immigration website VDARE, believes that diversity has weakened the United States, and that the increase in Spanish speakers is a “ferocious attack on the living standards of the American working class.”

That link doesn't go to our site and Peter saying that or anything like it, needless to say. It goes to a 2012 article about Peter's speech at CPAC (on bilingualism in Canada and America) in which reporter Sofia Resnick wrote:

Brimelow said that in the U.S., bilingual education and policies that require translations of voting documents are products of liberal “elites” and argued that the policies hurt the country’s non-immigrant working class. His only example of this was that Americans are being shut out of jobs at McDonald’s because they don’t speak Spanish.

“In 50, 60 years, the Montreal Anglos have gone from being Romans to being Anglo-Argentineans … they’re essentially assimilated,” Brimelow said. “I think that something like that is going to have to be done [in the U.S.]. It’s not enough to have official English at the government level. I get email all the time from people at eastern Washington state and places like this, who say that kids can’t get jobs at McDonald’s and places like that because they don’t speak Spanish. Essentially this is a ferocious attack on the living standards of the American working class … just as immigration policy in general is.”

I don't know why she said "only example"—it's a lengthy speech, transcribed here—but there are many jobs now where not speaking Spanish keeps teens from being hired. See, for  example, Black Teens Feel the 'Bilingual Preferred' Summer Job Blues, by Chris Levister, Black Voice News, May 3, 2008.

But it's not an increase in the number of Spanish speakers that does this to teens, it's an American government policy that, unlike Quebec policy, allows employers to require employees to speak Spanish, and discriminate against the native-born.

No increase in foreign language immigration could to this to the French-Canadian teenage workers in Quebec, because retail establishments are forbidden by law to require workers to speak anything but French. See In Quebec, Aaron Schlossberg Would Be a Hero And The Restaurant Fined—Because Quebec Wants To Survive As A Nation.

Peter's whole speech is below, and the "ferocious attack" part is at 14:20.