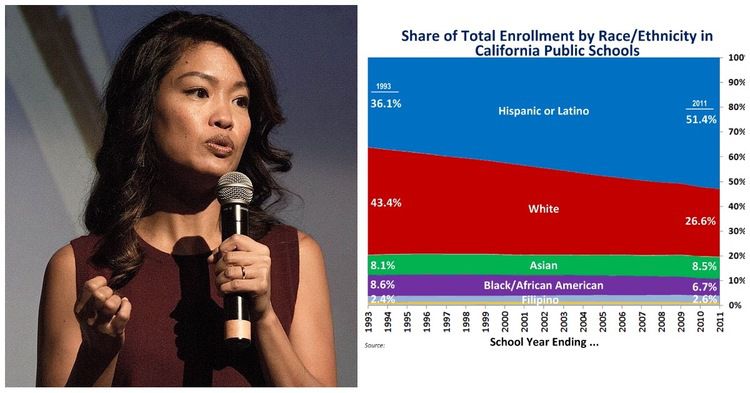 Conservatism Inc: "Identity politics isn't real! If you even notice demographics, you're ruining the GOP!"

As this is written, Michelle Malkin is being savagely attacked by Conservatism Inc. shills who seek to deplatform her. Of course, one of the main reasons why is because she has recently written a brilliant book on immigration, an issue Conservatism Inc. simply doesn't want to discuss seriously.

The other main reason is because she has refused to throw Nick Fuentes under the bus and is pushing back against the Conservatism Inc. norm that the movement must take its orders from antifa masquerading as journalists.

Finally, Malkin recognizes that the American melting pot has failed, and that Democrats are simply importing voters who are hostile to the American nation. This is what Peter Brimelow calls mass immigration's function of "Electing A New People."

Families like mine, which revere rule of law, common traditions, constitutional principles, 1 identity & 1 tongue, have been replaced by militantly unassimilable & hostile generations of future Democrat voters whose tribal allegiance to the Left has only hardened over time. https://t.co/aBHO5BLlO0

Charlie Kirk recently called people "cynical" who don't think Third World immigrants will suddenly start acting like model conservatives. Yet liberal journalists know the truth, and aren't afraid to rub it in Americans' faces, complete with the colonizers waving the flag of their real country.

Democrats dominate politics in California and Republicans are doomed for one simple, overriding reason: shifting demographics.

In short, the GOP’s core constituency is white people and they’re a declining slice of the California population pie. Conversely, Democrat-backing Latinos and Asian Americans have been expanding their slices.

That pattern is projected to continue, although at a slower pace. So the raw numbers won’t be getting any better for the already weakened California GOP.

“This is not just in California, but nationally. It’s happening here first. But it’ll tend to happen around the country.”

As Malkin notes, Conservatism Inc.'s solution is to shoot the messenger.

Mass migration demographics doom American sovereignty. That was message of UCLA speech that got me blacklisted by @yaf - it’s message of #OpenBordersInc & my CPAC speech. And it’s the message of kids being smeared on campuses. Establishment GOP’s solution? Shoot the messengers. https://t.co/5YEawo7dgL