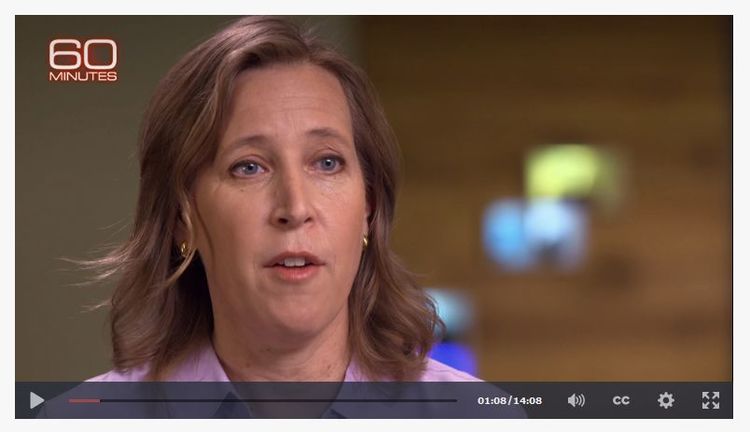 See, earlier, Is Youtube CEO Susan Wojcicki, Who Spoke Power to Truth with James Damore, "The Most Powerful Woman on the Internet?"

I've argued before that journos function as Narrative Police. Their job is to make sure that certain ideas are not given a platform. Each story is a thinly veiled campaign for independent voices to be silenced.

Thus we have 60 Minutes (is that show still on the air?) demanding more censorship on YouTube. Lesley Stahl interviewed Susan Wojcicki and hectored her to ban even more people.

[T]he site has come under increasing scrutiny, accused of propagating white supremacy, peddling conspiracies and profiting from it all. They recently agreed to pay a record $170 million dollars to settle allegations that they targeted children with ads. YouTube is being forced to concentrate on cleansing the site.

[How does YouTube handle the site's misinformation, conspiracy theories and hate?, by Lesley Stahl, CBS, December 1, 2019]

Notice the language that you see from journos again and again. "The site has come under increasing scrutiny." From whom? From the journos themselves.

Susan Wojcicki: You can go too far and that can become censorship. And so we have been working really hard to figure out what's the right way to balance responsibility with freedom of speech.

But the private sector is not legally beholden to the First Amendment.

Lesley Stahl: You're not operating under some—freedom of speech mandate. You get to pick.

The report notes that "YouTube makes most of its money from ads, splitting revenue with people who create all kinds of videos. From do-it-yourself lessons to hip-hop lessons. The more popular ones can become multimillion dollar entrepreneurs." Thus, what Google/YouTube has is the power to determine who gets to have a business and who doesn't. If they don't like what you are doing or saying, or if they want to promote a competitor, you are out. For example, when Red Ice was recently banned, that was essentially a purge of an entire business.

Lesley Stahl takes care to point out that Google/YouTube is not bound by the First Amendment, (despite it being heavily subsidized by the government) [Google, Tesla, Apple, Facebook rake in massive subsidies: report, by Ethan Baron, Mercury News, July 3, 2018].

Lesley Stahl: You recently tightened your policy on hate speech.

Susan Wojcicki: Well, we have had hate policies since the very beginning of YouTube. And we—

Rather amusingly, the reviewers whose job it is to censor and ban often end up believing the information in the forbidden videos.

Lesley Stahl: I also heard that these monitors, reviewers, sometimes, they're beginning to buy the conspiracy theories.

Susan Wojcicki: I've definitely heard about that. And we work really hard with all of our reviewers to make sure that, you know, we're providing the right services for them.

You'd think this might be a moment for self-reflection, but alas, you'd be wrong.

If one YouTube channel can overcome this Leviathan, doesn't this mean that there might be something to it? If people must be carefully guarded from seeing the "wrong" information, even in marginal corners of the Internet, there's no reason they should be given the vote.

What journos really want is the abolition of self-government. And they have almost achieved it. America's form of government is, in essence, not much different from China's. Of course, by and large, I think China's elites promote healthier values.

Just to show how far we've fallen, here's Christopher Hitchens, once a leftist idol, defending "extra protection" for even the most extreme political speech. Had he somehow beaten his cancer, there's no doubt he'd be called an "Alt-Right Darling" today.

If you want to fight back against this, please invest in us this Giving Tuesday. We've got a lot of exciting projects ahead. And as you can probably tell from this segment, our opponents are scared.