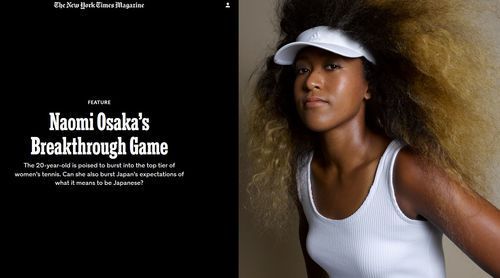 The world was agog recently over the Serena Williams meltdown at the U.S. Open over her cheating scandal, then loss to what is sometimes described as a half Japanese half black younger player, Naomi Osaka. While most of the ink spilled revolved around Williams’ cries of racism and sexism, then the subsequent tantrum over a cartoon accurately showing her lack of self-control and lack of sportsmanship, the real story was the short-lived Naomi bubble in Japan.

Osaka, who doesn’t use her Haitian immigrant father’s name is half Japanese, half Black, was born in Japan, but has lived in the United States since she was three and is an American citizen by derivation from her naturalized father. She represents Japan in international tennis competition, despite not speaking Japanese. Her Haitian father is not assimilated to the United States, declaring that their household is one of Japanese and Haitian culture, but not, you know, American.

After her likely flash-in-the-pan win, Osaka was feted in Japan over the summer. She, of course, snagged endorsement contracts in Japan, the largest being Nissan, the automobile manufacturer. What was of interest during her tour, and, importantly, during her victory press conference with her father after her win, was her lack of interest in Japanese culture, and her basically phrasebook Japanese. Japanese friends have told me her father was fluent, and at the press conference he publicly humiliated her for her lack of Japanese language skills. This is big in Japan, as to publicly and explicitly humiliate someone by pointing out their failings is something that is not done in Japan. Also interesting was that her mother was entirely absent from public events.

Now, while publicly she was respected in her appearances in Japan, even a gaijin like me could see the concern, to put it mildly, the Japanese had concerning her. At her big debut as a Nissan paid celebrity, she embarrassed herself by having to do the public event in English. While every Japanese person involved in this and other public events was scrupulously polite to her, as all Japanese are to others, especially foreigners, it was very reserved. Basically, although she represents Japan in international tennis, she was treated like a foreign visitor.

Osaka was also quite un-Japanese, as she could not stop talking about herself and her wants. That is considered shameful, uncouth, and embarrassing. In Japan, one is not supposed to tout oneself. One always speaks of one’s failings and how one must work harder to be better when in public, even for celebrities. Now, for non-Japanese, that is not the rule. Braggadocio and self-absorption are acceptable for foreign celebrities. But most foreign celebrities usually don’t speak much, just smile, wave for the camera, and plug whatever they are plugging, usually a movie, as otherwise most Japanese are not interested in foreigners. Overall, Osaka was not a good fit for Nissan.

Contrast Osaka with two American celebrities popular in Japan, Tommy Lee Jones and Tom Cruise. Jones is now a ubiquitous spokesman for Boss Coffee in Japan. Jones’ commercials are understated and he plays the amusing halfway between being a foreigner in Japan and playing at being Japanese, but the joke is he might dress up in a Japanese part, but even to the actors in the commercial, he is obviously not Japanese.

When Tom Cruise appears in Japan, he is a true celebrity. The Japanese love Cruise, mostly because he is the A-list celebrity in the world, still going strong with blockbuster movies. Also, because he is shorter than most western celebrities, and the Japanese are not so intimidated by him.

He, of course, speaks no Japanese, but the Japanese do not expect him to, unlike Osaka, who portrays herself as Japanese, but does not speak it. Contrast also how both are treated in Japan. Osaka gets polite but distance from Japanese press and television interviews. Cruise however gets the fawning treatment.

I was in Japan a summer or two ago, when one of Cruise’s movies was out and he appeared on the largest morning variety show in Japan, Zip. Now Japanese morning shows are decidedly unserious, unlike American morning shows that are known for their tendentious cultural Marxism mixed with celebrity news. When Cruise appeared, the obsequiousness of the Japanese interviewer, a man to boot, was endlessly amusing to a westerner like me. When Cruise entered the set, the interviewer gave him a deep bow, usually reserved for the emperor. No one respects Osaka as they do Jones or Cruise, and for obvious reasons.

The older generation in Japan was the least impressed. I closely observed a friend’s mother watching and responding to broadcasts of her public appearances, and her response was one of bemusement. Basically, to this representative of an older generation, that generation that were small children during the late war, did not consider Naomi Osaka to be Japanese, for good reason, in no way is she, not racially, not culturally, not linguistically, not by any attempt to acculturate.

However, these so-called hafu are an issue, and there are the usual suspects, white globalists seeing to deracinate Japan with the bludgeon of immigration and race mixing.

Unlike a person raised to think that it’s OK to be different, there are many children in Japan who still don’t get a chance to form their own positive spin on their ethnic identity. They often come from mixed-roots backgrounds and in Japan they are labeled: hafu. Now, roughly 1 in 50 kids born in Japan are half-Japanese.

The term hafu is commonplace for someone who has one parent of Japanese descent and one parent who is of foreign descent. For those unfamiliar with the term, it does come preloaded with its fair share of controversy and negative undertones. It can imply that someone is “only” half — and lead to the larger perception of just how Japanese is “Japanese enough”?

In recent news, Naomi Osaka (who is a Japanese-Haitian hafu) became the first Japanese tennis player to win a Grand Slam singles tournament. She even got a Shinzo Abe (the Prime Minister of Japan) retweet. Attitudes of accepting Osaka as simply Japanese rather than half-Japanese seem to at least be better than even a few years ago. [Japan’s Schools Are In Total Denial Over Diversity, by Victoria Vlisides, Gaijinpot, January 26, 2018]

Now, our young globalist who wants to destroy Japan with diversity does not understand, or more accurately, is opposed to the notion that the Japanese do not recognize the hafu or the foreign born as being Japanese. As I wrote before, in Japanese Refuse To Declare Foreigners Born In Japan To Be Japanese Citizens,, the Japanese don’t consider a matter of geography or partial blood to make you Japanese. If you obviously stand out as not Japanese, then ipso facto, you are not Japanese. No birthright citizenship in Japan. It is jus sanguinis, a matter of blood, and full blooded at that, no hafu or border jumper can be Japanese. Naomi Osaka, despite her Japanese, and American, passport, or because of that American passport, is not Japanese. And the Japanese don’t think she is.