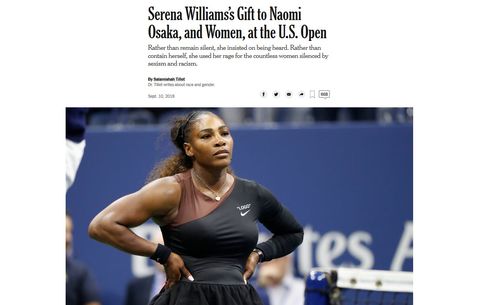 I can’t get enough of all these Tennis Temper Tantrum op-eds about how Black Women are Angry about the Angry Black Women stereotype. From the New York Times opinion page:

Serena Williams’s Gift to Naomi Osaka, and Women, at the U.S. Open

Rather than remain silent, she insisted on being heard. Rather than contain herself, she used her rage for the countless women silenced by sexism and racism.

By Salamishah Tillet
Dr. Tillet writes about race and gender.

I bet she does.

… In her defiance and dismay, we saw ourselves: women who play by the rules, exceed professional expectations, and yet, still find ourselves constrained by the Angry Black Woman stereotype …

Even as a child I worried about the effects of the Angry Black Woman stereotype.

Professor Tillet of Rutgers is mad as hell about our society’s Angry Black Woman stereotype and she’s not going to take it anymore. Serena has liberated angry black women to act out what they’ve always wanted to do: be black women who are angry.

Seriously, isn’t the lesson of the Current Year that what everybody, deep down inside wants, is to be able to act out in the most racially stereotypical manner imaginable?