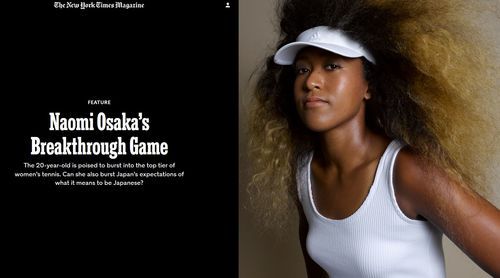 The Japanese are a physically small race and have few famous athletes on the world stage. Japan has also been one of the few successful countries to staunchly resist the zeitgeist’s pressures to open the borders, especially to the world’s fastest growing racial group, blacks. But big corporations are working to undermine Japan’s resolve, using, for example, a giant half-black American girl tennis player as a wedge.

The 20-year-old is poised to burst into the top tier of women’s tennis. Can she also burst Japan’s expectations of what it means to be Japanese?

… Only in this case, the parents’ unlikely union has led to the emergence of one of the most intriguing young stars in sports today: an athlete who has grown up in one place (the United States), represents another (Japan) and, for some, symbolizes something as large as the world’s multicultural future. In playing under the flag of an island nation noted for its racial homogeneity, Osaka challenges assumptions about whether and under what circumstances a biracial person might be accepted as truly Japanese.

… At 20, she is the youngest woman in the world’s Top 20 — and Japan’s highest-ranked female player in more than a decade. … Tsuyoshi Yoshitani, a sports reporter with Kyodo News, says: “Naomi is like no Japanese player ever before. I think she will be the first Japanese player to win a Grand Slam.”

Yet Osaka’s rise is accompanied by a curious tension: She is half-Japanese, half-Haitian, representing a country whose obsession with racial purity has shaped her own family’s history. Though born in Japan, Osaka has lived in the United States since she was 3. She is not fully fluent in Japanese. Yet nearly a decade ago, her father decided that his two daughters would represent Japan, not America. It was a prescient move. Osaka’s success — and her tweeted affection for Japanese manga and movies — has endeared her to Japanese fans hungry for a female tennis star.

What makes Osaka so complicated for Japan is precisely what makes her so appealing to many fans and corporate brands around the world. The young woman with the fearsome forehand and 120-mile-per-hour serve may not simply be the future of women’s tennis. “When I look 15 years into the future, I see Naomi having a great tennis career, perhaps even with Grand Slam titles,” Stuart Duguid, her agent at I.M.G., says. “But I also hope that she’s changed cultural perceptions of multiracial people in Japan. I hope she’s opened the door for other people to follow, not just in tennis or sports, but for all of society. She can be an ambassador for change.” …

Japan’s long history of guarding against foreigners dates back to the 1630s, when the Tokugawa shogunate cut off the archipelago from the rest the world.

… One evening in 1999, when the girls were just toddlers, Francois became transfixed by a broadcast of the French Open featuring the American prodigies Venus and Serena Williams, then 18 and 17, who teamed up to win the doubles title that year. Francois played little tennis. But Richard Williams, the sisters’ father and coach, had played none at all. And Williams had created a plan to turn his daughters into champions, teaching them how to serve big and hit hard from every corner of the court. “The blueprint was already there,” Francois told me. “I just had to follow it.”

Naomi Osaka has few memories of her early years in Japan. The family left for the United States when she was 3, moving in with her Haitian grandparents on Long Island. …

Their Asian side won out in another essential way. Instead of taking their father’s last name, the girls used their mother’s name — a Japanese surname that, improbably, is the same as the city of their birth. …

The family moved to southern Florida in 2006 to focus on tennis full time.

… His daughters, from age 13, would play for Japan, the nation they left behind nearly a decade earlier.

… Osaka’s grasp on the [Japanese] language is more tenuous. …Her reluctance can create awkward moments at news conferences, with Japanese reporters asking questions that she answers in English.

The decision to play for Japan has had major repercussions in Osaka’s life, from the way she is perceived in Japan and the United States to the size of the endorsement contracts she can now command as a top Japanese athlete ahead of the 2020 Tokyo Olympics. Though some in the tennis world wondered whether the decision was influenced by commercial prospects — the Japanese star Kei Nishikori’s massive endorsements were no secret — the family insists that the girls were too young and unproven for that to be a factor. The Japan Tennis Association, facing a drought of top female players, offered them an opportunity. …

In Japan, a mixed-race person is known as hafu (from the English word “half”)….

The realm of sports has been more welcoming. Unlike Miyamoto, Osaka has been embraced by Japanese media, companies and fans hungering for a female tennis star. Nissin, one of the world’s largest instant-noodle companies, has already signed her to a lucrative deal, as has Wowow, the tennis channel that broadcasts her matches in Japan. The Osaka camp plans to announce a large new endorsement deal before the U.S. Open, and other Japanese multinationals are circling. Osaka’s biggest payday may come at the end of the year, when her Adidas shoe-and-apparel contract expires — just in time for the prelude to the 2020 Tokyo Olympics.

If Osaka played under the American flag, it’s very unlikely that these opportunities would exist. Japanese companies would have no reason to court her and U.S. brands would have other higher-ranked young guns to consider, like Madison Keys and Sloane Stephens. But as Japan’s top-ranked player, Osaka has the full attention of the country’s top brands, whose sponsorship fees can run far higher than those of their Western counterparts. There’s a reason Nishikori, despite never having won a Grand Slam title, surpassed bigger stars like Rafael Nadal and Novak Djokovic in endorsement income over the past year, with $33 million, according to Forbes. Only Roger Federer earned more. “Kei’s been a trailblazer for Naomi,” Duguid, her agent from I.M.G., says. “He’s opened doors for tennis in Japan and across Asia.” But with Osaka’s combination of youth, authenticity and cultural diversity, he says, “she might have more global appeal.”

… Osaka’s game and powerful 5-foot-11 frame stood in stark contrast to the other Japanese singles player, Kurumi Nara, who is just 5-foot-1. “Everything about Naomi breaks the mold,” says Kenshi Fukuhara, a producer with Wowow. “Physically, she’s so much more powerful than other Japanese players. She looks more like Serena, but she’s very Japanese inside.”

Nao Hibino, a 23-year-old Japanese player who has been ranked as high as 56, appreciates all the attention Osaka has brought to women’s tennis in Japan. But she still finds it hard to conceptualize her as a Japanese player. “To be honest, we feel a bit of distance from her because she is so physically different, she grew up in a different place and doesn’t speak as much Japanese,” …