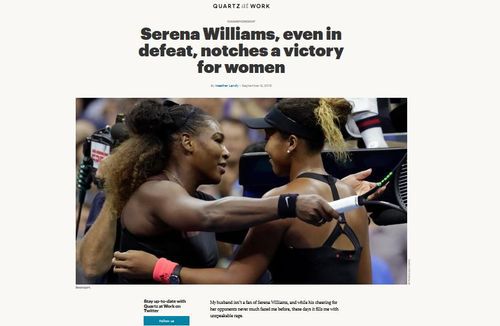 "Serena Williams, Even in Defeat, Notches a Victory for Women"

Serena Williams, even in defeat, notches a victory for women

My husband isn’t a fan of Serena Williams, and while his cheering for her opponents never much fazed me before, these days it fills me with unspeakable rage.

Williams is a 36-year-old woman who exists in a system that wasn’t built for her, who excels at a game that isn’t kind to her, who put her body and indeed her life at risk to have a baby that now depends on her, and is still expected to handle every setback with ease and graciousness, which most of the time she does. (“Everything’s fine, guys,” she said at a press conference after French Open officials banned the catsuit Nike developed for her to help her guard against blood clots.) I can’t understand why more people like my husband aren’t outside right now erecting statues of Williams, let alone able to drum up enough empathy to just cheer her on in a tennis match.

Watching her melt down in the finals of the US Open yesterday (Sept. 8) against 20-year-old Naomi Osaka, I was torn—on the one hand certain her arguing with umpire Carlos Ramos was doing her no favors, and on the other hand appreciative that she was perhaps doing the rest of the world a favor, calling out a perceived injustice against women right as it was unfolding.

While many people are under the misapprehension that Serena was playing a young woman named Naomi Osaka, in reality she was playing Bobby Riggs. So Serena was kvetching not for herself against another woman, like many of you wrongly assume, but for All Women.

A quick recap: Williams, who lost the first set badly and was down in the second

In other words, roughly the equivalent point in the match at which Mike Tyson decided he was going to preserve his marketable reputation as the Most Dangerous Man Alive, despite getting thoroughly outboxed by Evander Holyfield, by biting Holyfield’s ear off and getting disqualified rather than just inevitably losing.

, had been given a warning for receiving illegal coaching. After breaking her racquet in frustration, a second code violation, she was given a one-point penalty. This didn’t go over well with the 23-time grand slam champ. “You owe me an apology,” she cried to Ramos. “I have never cheated in my life. I have a daughter and I stand for what’s right for her.”

She was playing the mom card! And why shouldn’t she? Motherhood is an inextricable part of her identity now, not just as a person but as a tennis player. Williams, it has been noted, would be only the fourth mother to win a grand slam in the Open era. The US tournament, we are told, coincided with her baby’s first birthday. (How many fathers have won grand-slam championships? When are Roger Federer’s children’s birthdays? We don’t know, and more than that, we don’t care.)

Moms are the single most important target audience for advertisers.

That Williams’ mind went to her daughter in the midst of an on-court dispute is not surprising. To be a mother to a daughter is to worry that slights against you will someday become slights against her, as you struggle over whether it’s better to raise a girl who is more prepared for the world as it is or for the world that you hope will be. How my husband could know this, and know how I feel about it, and still root against Williams was beyond me. It felt like a personal betrayal.

If 36 year old mom Serena has beaten her 20 year old rival, that would prove I’ve still got it and don’t have to worry about 20 year olds stealing my husband from me, the bastard.

We began to argue, basically mirroring the dispute we had just seen on television, with my husband calmly pronouncing Williams guilty of bad sportsmanship and me getting fairly worked up over his lack of empathy.

… At the end of the next changeover, Williams again approached the umpire and accused him of being a thief who “stole” a point from her, at which point he docked her a game.

No, it’s not right. But in professional tennis, as in workplaces in different industries around the world, there are all kinds of double standards for men and women—plus the maddening corollary that a woman must behave like a lady in those moments when she realizes how unjust it all is. Watching Williams cast off those expectations and call out the sexism she’s seen, in the middle of a major tennis championship on national television, felt like a revelation.

You see, “sexism” is the very existence of younger, hotter women. Something must be done about sexism.

Seriously, average people have always rooted for super successful people whom they identify with — Serena, Beyonce, Tom Brady, etc. — to be even more successful in the feeling that somehow that would rub off on them and make their lives better. But, at least, we used to realize that kind of thinking is stupid.

Today, however, with the masses having gone to college and been taught post-modernist social constructionist dogmas, that kind of rooting sounds smart. Because it’s prestigious and fashionable, we now get middle-aged married ladies stressing their marriages over their husbands not rooting for Serena or Hillary or whomever.