Mexico Border: They Keep Coming—The Kiddies & Moms, That Is

Is is not curious that illegal border crossings greatly increased in July? The influx normally slacks off in mid-summer because of the killer heat on Mexico’s northern edge. Furthermore, the unaccompanied alien children, AKA UACs, were up 27 percent, and family units escalated by 46 percent.

Is a new kiddie surge beginning?

Back in 2014, the Border Patrol under Obama were repurposed to welcome illegal immigrant families as shown below as they hopped off a government-supplied bus in Arizona. 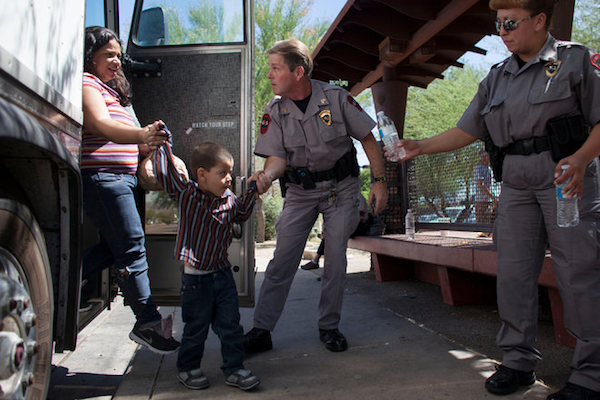 Regarding the uptick, the DHS spokesman cited in the article below observed, “. . . we don’t know what all of those causes are.”

Perhaps the foreigners have noticed that President Trump’s crackdown on illegal aliens has omitted the DACA (Deferred Action for Childhood Arrivals) class of young illegals. In fact, candidate Trump promised to end the unconstitutional program on Day #1 of his presidency, but he did not. Worse, the DACA program is still growing, continuing to add new beneficiaries who are then permitted to take jobs and college slots that should go to young Americans.

Therefore, the kids appear to be the keys to the kingdom.

Moochers aren’t necessarily morons. Would-be illegal aliens pay attention to the pronouncements and actions of the American president, and they respond accordingly, as shown by the flood who headed north when Obama announced his open door to poor Central Americans a few years back.

So they keep coming because they perceive there is still a chance for them.

UAC up 27 percent, families up 46 percent

Illegal immigration across the southwest border surged 15 percent in July compared to the month before, Homeland Security announced Tuesday, signaling that President Trump’s early success in stemming the flow of people jumping the border has begun to lessen.

The border patrol nabbed 13 percent more illegal immigrants last month than in June, while officers at the ports of entry saw a 23 percent spike in the number of inadmissible aliens showing up and demanding entry. The number of Border Patrol arrests is deemed a yardstick for the overall flow of people.

July usually sees a drop, so the surge signals a change in the usual seasonal patterns.

“The short answer is we don’t know what all of those causes are,” he told reporters.

The numbers of families and unaccompanied alien children (UAC), which have been particularly troublesome cases, also saw huge spikes. UAC were up 27 percent in Border Patrol statistics, while people traveling together as families surged 46 percent.

Still, even with the rise month-to-month, the numbers are lower than they have been in years.

Customs and Border Protection officers at the ports of entry recorded 6,833 inadmissible aliens trying to enter. The Border Patrol, meanwhile, nabbed 18,198 illegal immigrants who snuck across the border.