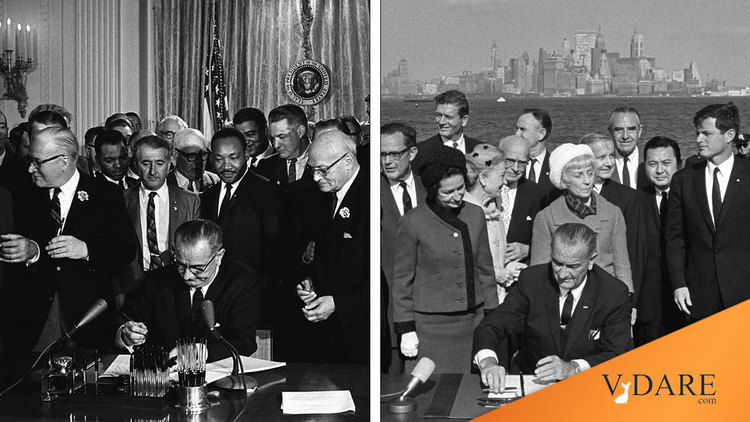 Mass Immigration And The "Civil Rights" Movement Are Twins

I was watching the 1973 movie Executive Action [Watch online] starring Burt Lancaster. It's a fictionalized account of the JFK assassination and speculation on who could have been behind a conspiracy. The bad guys appear to be rich Texas oil men (the screenplay, which blames conservative white Americans for the actions attributed to Communist gunman Lee Harvey Oswald was written by... Communist Dalton Trumbo) and one of them hints very strongly that the moment a Civil Rights Act is passed, then everyone from the Third World is going to want to come here.

Foster (Robert Ryan): The real problem is this, James. In two decades, there will be 7 billion human beings on this planet. Most of them brown, yellow or black, all of them hungry, all of them determined to love, and swarm out of their breeding grounds into Europe and North America. Hence, Vietnam. An all-out effort there will give us control of South Asia for decades to come. And with proper planning, we can reduce the population to 550 million by the end of the century. I know. I've seen the data.

James Farrington (Burt Lancaster): We sound rather like gods reading the Doomsday Book, don't we?

Foster (Robert Ryan): Well, someone has to do it. Not only will the nations affected be better off, but the techniques developed there can be used to reduce our own excess population. Blacks, Puerto Ricans, Mexican-Americans, poverty-prone whites, and so forth.

Immigration restrictionists tend to focus on the Immigration Act of 1965 as the start of the recent downfall of the United States. However, many of the same people behind the 1965 Act were also the ones who helped to pass the 1964 Civil Rights Act. Repealing or overturning the 1964 act would be a step in the right direction. The Supreme Court seems to be inclined to take a second look at it.

Having been so indoctrinated from a young age about the Civil Rights Act, it feels awkward just writing about repealing it. As if that were somehow unpatriotic. In modern terms, it's up there as a sacred document like the Bill of Rights or the Declaration of Independence. Am I not worried that my civil rights would be taken away too? But, then I thought about it. The country was existing just fine before the passage of the 1964 Civil Rights Act. What did the act actually do in practical terms? Did it defend the rights of white people ever?

They like to include women as "minorities" although women make up a slight majority of the population. Combine that with white people only making up between 11 and 14% of world population depending on the source, and whites are true minority, especially when you have an open border. Yet, everyone but white males was getting more rights.

Frankly, as a white person, I don't see much downside to the repeal of the 1964 Civil Rights Act. I doubt it will have much of a negative effect on my life, and it may prove to be highly beneficial.

Barry Goldwater objected to the bill on more Constitutional grounds. He feared that it was a step towards a police state [Why I Won’t Vote for the Civil Rights Act of 1964, by  Sen. Barry M. Goldwater, June 18, 1964]

(Incidentally, JFK may very well have won the 1960 election thanks to voter fraud in Chicago. After his assassination, he became such a martyr that the Democrats could pass just about any bill they wanted. The new president, LBJ, had his own history with fraudulent elections.  So, the pathway towards the falling apart of the United States may very well have started thanks to ruthless politicians willing to commit voter fraud to win).