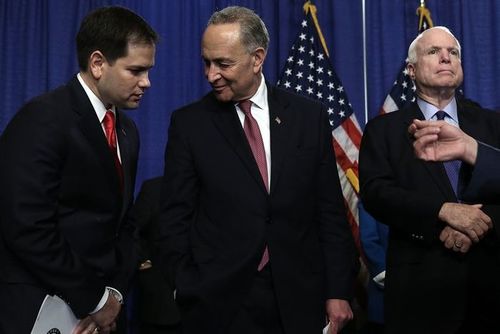 Marco Rubio Only Strong Because He Hasn't Been Confronted On Immigration

The Main Stream Media is going out of its way to promote Marco Rubio as the new Establishment favorite. But they're ignoring his biggest weakness—immigration.

On the crucial issue of immigration that has already upended the contest via the surge of support for Donald Trump, Rubio is on the wrong side of the party's rank-and-file voters and in lockstep with the elements of the establishment they most mistrust. His record on the issue isn't just wrong from a Tea Party point of view, it's downright weaselly — arriving on the political stage as a champion of their cause only to draft a bipartisan bill betraying them on a huge issue.

Donald Trump had a huge (sorry, "yuge") opportunity to confront Rubio on H1-b visas at the last Republican debate but he blew it. He's been trying to make up for it since then. We will see what happens at the next debate. However, even if Trump does not bring it up, there's another conservative challenger (and skilled debater) who we can expect will throw down the gauntlet to Rubio on his Gang of Eight bill and an Amnesty/Immigration Surge. That's the man who is in third place in some national polls, Texas Senator Ted Cruz.

If by the next debate Rubio has succeeded in clearly displacing Jeb Bush as the establishment favorite, then the incentives for Cruz and Trump (or even Christie or Fiorina) to start lighting into Rubio on immigration get a lot bigger. But as Cruz himself outlined to Shane Goldmacher, his current plan is to focus on consolidating the vote that he is currently splitting with Trump and Ben Carson and only later turn on whomever the strongest establishment-friendly candidate will be...

Only when it becomes clear that Rubio is the guy will Cruz start unleashing the obvious lines of criticism. Facing that argument isn't necessarily an insurmountable problem for Rubio, but it does seem like a serious one... A large minority of Republican members of Congress — including Marco Rubio — agree with Barack Obama and Hillary Clinton about the desirability of legal status and a path to citizenship. A majority of GOP elected officials and the vast majority of rank-and-file Republicans do not.

At a moment when many conservative activists feel they have been betrayed by party leaders, the mere fact that GOP elites like Rubio does nothing to assuage concerns about his stance on immigration. On the contrary, wariness of Rubio as soft on immigration and wariness of the establishment as eager to sell out the base form a powerful mutually reinforcing counter-Rubio narrative. It hasn't hurt him thus far because it simply hasn't been tried. But it's nearly inconceivable that Rubio can keep coasting much longer without facing his core vulnerability.

God knows Ben Carson won't mention immigration when he's up there. He might start veering into another weird endorsement of a quack medical product. And Cruz himself has a troubling record on immigration. He barely mentioned it when he announced he was running for President. He's been absolutely terrible on legal immigration, seemingly not realizing that the problem is the number of immigrants, not whether they have a piece of paper or not.

However, objectively, Cruz has been running a strong campaign, quietly moving up to third place and poised to strike if Carson or Trump stumbles. And his strategy is to mobilize the white vote to win the primary. At some point, he'll need to confront Rubio and immigration is the best way to do it.

Of course, if the campaign returns to immigration as the primary issue, there's only one candidate who has defined himself by the issue and has laid out a detailed platform about how to solve the problem. And that's Donald Trump.