For Ted Cruz, Legal Immigration Cannot Be Questioned, But Scott Walker Is Still Questioning It 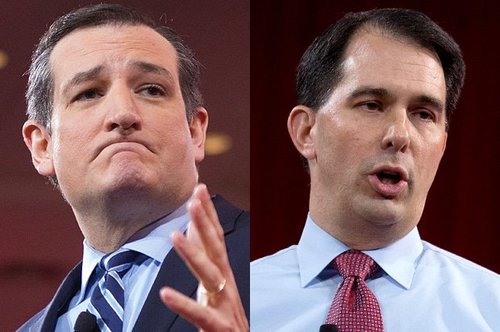 "I am not only witty in myself, but the cause that wit is in other men." Thus quipped Falstaff in Shakespeare's Henry IV, Part 2.

In a similar fashion, De Facto Candidate Scott Walker's foray into the taboo area of questioning legal immigration is good. It's not only good for Walker, it's good because it provokes other candidates to have to talk about it, too. Already, Candidate Ted Cruz has been forced to talk about it.

The issue came up when Cruz was interviewed by David Drucker of the Washington Examiner:

DAVID DRUCKER: One of your competitors in the contest — soon to be competitors – said that even legal immigration needs to be considered with respect to American wages and its impact on the wages of American workers. That was Governor Scott Walker. What did you think of that and do you agree or do you have a different view on how the U.S. should deal with legal immigration?

There is considerable bipartisan agreement outside of Washington that we need to improve and streamline legal immigration so that we can remain a nation that welcomes and celebrates legal immigrants. I think it is a mistake for any politician to on the one hand embrace amnesty — embrace a pathway to citizenship for those who are here illegally — and on the other hand seek to restrict or punish legal immigrants. Amnesty is wrong.

When I campaigned for the US Senate I campaigned unambiguously against amnesty and was proud to receive 40 percent of the Hispanic vote in the state of Texas at the same time Mitt Romney was getting clobbered with 27 percent of the Hispanic vote nationwide. But I am the son of an immigrant who came legally from Cuba. Reagan referred to legal immigrants as Americans by choice and there is no stronger advocate of legal immigration in the U.S. Senate than I am. I think the right approach is to secure the border, follow the rule of law, and embrace and improve legal immigration.

Notice he says that it's wrong to "restrict" legal immigration. What? So does Cruz believe every single person on the planet has the right to move here, as long as he does so legally? Somebody should press the candidate on the question. Can Cruz get beyond the rhetoric and his family history to see the big picture?

The good thing is the issue is out there and is being talked about.

As for Scott Walker, the  New York Times reports that in Iowa, some young Republican whippersnappers, who sorely need some exposure to VDARE.COM, asked Walker about legal immigration. And Walker stuck to his guns

After giving a version of his stump speech to a mostly gray-haired crowd in Iowa, Gov. Scott Walker of Wisconsin was pressed on Friday by two twenty-something Republicans about a percolating issue he did not mention: immigration.

Mr. Walker’s apparent hardening on immigration has inspired a flood of reporting and commentary. Most recently he told the radio host Glenn Beck that he favored restricting legal immigration in tough economic times, a position to the right of most other 2016 presidential hopefuls.

He repeated that view Friday after a speech in Cedar Rapids, when Eddie Failor, 24, expressed concern “as a young Republican” that the party must make inroads to new voter blocs, including by supporting a comprehensive overhaul of immigration. Mr. Walker told Mr. Failor that his top priority would be securing the border. He also said he favored “making sure the legal immigration system is based on making our No. 1 priority to protect American workers and their wages.’’

Alexander Staudt, the treasurer of the University of Iowa College Republicans, also told Mr. Walker in the meet-and-greet line that he was concerned that by talking tough on immigration, Republican candidates would turn off Hispanics.

Here we go again on the "Hispanic Question". Somebody get Alexander's address and mail him some relevant VDARE.COM articles.

Walker had a good answer.

“In terms of how wide or how narrow the door’s open, our No. 1 priority is American workers and American wages,’’ Mr. Walker told him. “I don’t know how anyone can argue against that.’’

That's great. Rather than launch into yet another enconium on legal immigration and the "nation of immigrants" and all that rhetoric, Walker had the temerity to say "...our No.1 priority is American workers and American wages." It's simply mind-boggling, but in a good and refreshing way.

As for illegal immigration....

Both Mr. Staudt and Mr. Failor asked the governor what he would do about the millions of undocumented workers already in the country. Mr. Walker said they should return to their countries of origin and apply for legal entry. Mr. Staudt liked that answer. “The bigger that number gets,’’ he said, referring to undocumented immigrants, “it’s going to become less economically viable.’’ But Mr. Failor, who has attended several Republican candidates’ events this year, said he was disappointed. “He gave a conflicting message, in my opinion,’’ he said. “He said he’s not one who believes in spending billions of dollars to deport all these undocumented immigrants. When I asked if he supported a pathway to legal status, he said no, he’d send them back to their country of origin and let them get in line with everybody else. I don’t know how that works within the deportation equation.’’

Somebody please obtain Eddie's email and explain to him about self-deportation and attrition as a result of enforcement.