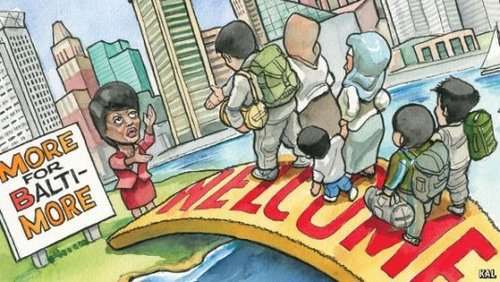 I have had a few critical emails following my explication of Magic Dirt Theory in last weekend's Radio Derb.

Oh yes they do.  Here is a specimen from the "Lexington" column in the current issue of The Economist.  The columnist is writing about Baltimore.

Like other north-eastern cities, it has grappled with economic decline, shrinking tax rolls and the toxic legacy of race laws which corralled black residents in districts blighted by bad schools and crime. [A city that wants more refugees; The Economist, October 31st 2015.]

Just read that twice and ponder the underlying assumptions.  The authorities identified a group of people and "corralled" them into "districts blighted by bad schools and crime."

The corrallees had no agency in the matter.  Those districts were "blighted by bad schools and crime" before they arrived.  The schools and the sidewalks were sitting there, husbanding their noxious miasmas, waiting for people to show up to inhale them.

What are they caused by?  Magic Dirt!

And of course, to pick up on one of Steve Sailer's oft-repeated points, those "toxic race laws" were last enforced around 1960, most of a human lifetime ago.

So along with Magic Dirt Theory, the other unconscious assumption here—I am sure that sentence I quoted tripped off Lexington's typing fingers without much conscious thought—is that nothing has happened in the past fifty years.

There you have two of the major structural members supporting our state ideology: