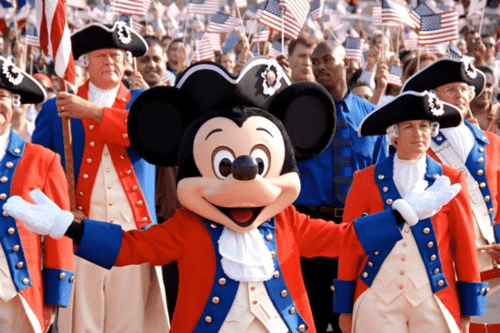 Disneygate Escalates as Trump Opens up on Immigration Fanatic Rubio

Donald Trump stepped in it at the third Republican debate. Of course, he also stepped in it on Syrian refugees about a month ago and swiftly moved to course correct. And that's precisely what he's done here.

Commenting on the current situation with H1-b visas and Disney replacing its own workers, Trump unloaded on Marco Rubio at Breitbart.

It’s a disaster. It would allow any company in America to replace any worker with cheaper foreign labor. It legalizes job theft. It gives companies the legal right to pass over Americans, displace Americans, or directly replace Americans for good-paying middle class jobs. More than 80 percent of these H-1Bs are paid less than the average wage. Senator Rubio works for the lobbyists, not for Americans. That is why he is receiving more money from Silicon Valley than any other candidate in this race. He is their puppet.

This is precisely what Trump needed to do. More importantly, in terms of Politics 101, Trump has now set the terms for another news cycle. Disney is as much a part of Americana as Coca-Cola. Now, Trump has set the stage for his supporters to demand Disney rehire these workers. And of course, Disney World is located in the home state of Marco Rubio and Jeb Bush.

If Trump can push this into the public square and force other candidates to comment, he will have turned a blunder into a victory.

Still, what was Trump thinking in the debate? Several people believe Trump was deliberately trying to pull his punches against other Republicans during the debate, notably staying out of it when Jeb tangled with Rubio (with catastrophic results). The theme of the evening was the GOP candidates joining forces against the moderators and Trump largely chose to stick with a congenial approach to his GOP colleagues, with the except of Kasich (who attacked Trump first). In short, Trump is trying to act more like a frontrunner and a GOP standard bearer. He's already thinking about the general election and uniting the party around him.

Of course, this is dangerous for him. And it still leaves the obvious problem that Trump was caught off-guard by something on his own website, namely, his immigration platform calling Marco Rubio Zuckerberg's "personal Senator." Luckily for Trump, the poorly prepared CNBC moderators didn't have the source for the quote at the time of the exchange. Thus, Trump dodged what could have been a devastating blow.

Now, once again, Trump has the advantage. Marco Rubio is a superior debater to Trump, but Trump is a more exciting stump speaker, better at attracting attention from the press, and has a dominant presence on social media compared to Rubio. Trump has chosen to fight this battle on terrain favorable to him.

We have to wait for the first post-debate polls to see where he stands compared to Rubio and Ben Carson. But for now, Trump Remains Unstumped.