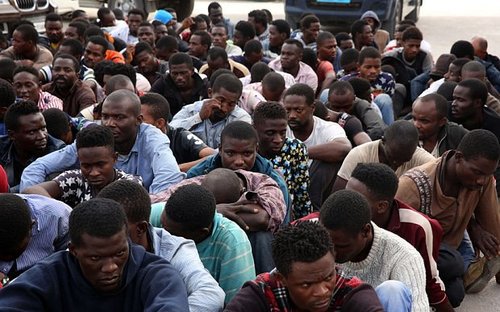 Weapons of Mass Migration—New Libyan Government Threatens The US

Libya has issued a veiled threat to send “hundreds of thousands” of extra migrants to Europe if Brussels does not give official recognition to its self-declared government.

Officials say they could hire boats to send large numbers of African migrants across the Mediterranean, massively adding to the numbers already reaching Europe’s borders.

The warning was made by a spokesman for the National Salvation Government of Libya’s General National Congress in an interview with The Telegraph in the Libyan capital, Tripoli.

That reminds me of an interesting-sounding scholarly book:

Dr. Greenhill wrote in the New York Times over 4 years ago:

In the early days of what grew into the Libyan uprising, Muammar el-Qaddafi summoned European Union ministers to Tripoli and issued an ultimatum: Stop supporting the protesters, or I’ll suspend cooperation on migration and Europe will be facing a human flood of from North Africa.

Given Libya’s history as an attractive transit point for North Africans seeking entry to Europe, it was a credible threat.

For one thing, it has worked to varying degrees at least four times in the last decade alone. Indeed, it was only the European Union’s promise to lift the last remaining sanctions against Libya in the fall of 2004 that persuaded Qaddafi to staunch what was then viewed as an alarmingly large flow of North Africans onto the tiny Italian island of Lampedusa and, from there, onto the Continent. To that point in 2004, about 9,000 people had landed on Lampedusa, 1,600 of whom arrived in the month prior to conclusion of the agreement between Brussels and Tripoli.

Although these numbers were not trivial, they were nothing compared to the predicted 750,000 to one million North Africans anticipated by Western European leaders this time around. Little wonder then that Prime Minister Silvio Berlusconi of Italy tried to maintain good relations with Libya for as long as he found it diplomatically possible.

Moreover, what happened in 2004 was not an isolated event. In 2006, and again in 2008, Qaddafi extracted from the E.U. additional financial aid and equipment (such as boats) that could be used for migration enforcement. In late 2010, the E.U. and Libya concluded a further £500 million accord, which succeeded in stopping, or at least demonstrably slowing, the flow of people across the Mediterranean — until the outbreak of unrest in Tunisia.

Tragic though it is for the victims of this kind of unconventional coercion, Qaddafi’s threatened use of demographic bombs is neither new nor unique. As I demonstrated in a study published last year, there were at least 56 attempts to employ the direct or indirect threat of mass migrations as a non-military instrument of influence between 1951 and 2006.

In about 73 percent of cases where it was attempted, would-be coercers got at least some of what they sought; in about 57 percent of cases, they achieved most, if not all, of their objectives. The majority of these coercive attempts were initiated by authoritarian dictators such as Cuba’s Fidel Castro, East Germany’s Erich Honecker, the former Yugoslavia’s Slobodan Milosevic and Uganda’s Idi Amin.