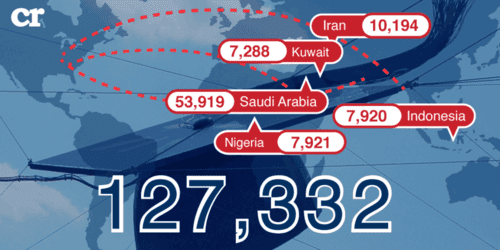 In fact Paul confined himself to wonkery:

There was a program in place that Bush had put in place—it stood for entry-exit program from about 25 different countries with a lot of Islamic radicals, frankly…

I’m going to have our subcommittee and maybe committee in Homeland Security look into whether or not we could reinstitute this NSEERS [National Security Entry Exit Registration System] program—it was entry-exit program that was heightened scrutiny for 25 predominantly Muslim countries that have significant jihadist movements and anti-American sentiment in their country,” Paul said.

The Left Libertarian blog The Libertarian Republic has tried to use this wonk-speak to claim that its hero is not, in fact, guilty of the foul crime of wanting to protect America: Fact Check: Rand Paul is NOT in Favor of Restricting Muslim Immigration Jesh Guckert July 18 2015.

Rand Paul is at best a fool, as VDARE.com Editor Peter Brimelow suggested in Rand Paul: Immigration Renegade Of The Year? My own less charitable view was laid out in Rand Paul Announces For AdelZuck Party Nomination (Then Flinches): Paul's handlers can smell the money.

What really interests me in this case was the response of the MSM to the eminently sensible idea of restraining Muslim immigration. It has been

As far as I can make out there has been no MSM pickup of Paul’s remarks. Word has obviously gone out, in the usual style, that no references to the subject are to be allowed.

It looks like word has gone out to the candidates too. Breitbart could not even get Bobby Jindal who being of Hindu extraction knows all about the dangers of Islam, to repeat sensible remarks he made back in January about Islamic influxes being colonization. From the rest, nothing.

My opinion: the big donors are signaling their usual double standard on dealing with Islam. Protecting America, as distinct from Israel, from the Muslim threat is not allowed.

They are, however, reckoning without the Drudge Report. This linked on Saturday to two fine articles by the irrepressible Daniel Horowitz at the Conservative Review: Chattanooga: The Effects of Our Suicidal Immigration Policy July 17th 2015 (snappier Drudge headline Muslim immigration to USA doubles in decade after 9/11...) and Student Visas from Muslim Countries on the Rise, 127K Last Year (from which I have acquired the above illustration).

It is time to say plainly that what killed the four Marines at the Navy and Marine Corps Reserve Center in Chattanooga, Tennessee was not “violent extremism.” It was President Barack Obama’s policy of importing jihad by bringing thousands of Muslim immigrants into the United States, and the Capitol Hill Republicans’ criminal culpability for being so politically correct and feckless that they won’t even talk about the existential threat this policy offers to constitutional liberty, let alone stop it.

We are in a war of ideas, not just with radical Islamists, but with concepts deeply embedded in Muslim culture. And as long as mass legal (and illegal) immigration from Muslim countries continues unabated we are losing that war.

Which leads us to ask, why would we bring these vipers to America and PAY THEM to stay here by granting them what amount to welfare benefits?

Calling Donald Trump…or anyone else with courage.