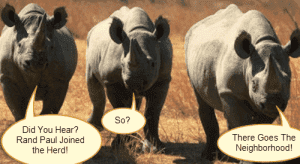 Early this morning, in what had appeared to be its current role of toscin to the nation, the Drudge Report gave top billing to a story it headlined PAPER: RAND PAUL JOINS AMNESTY MOVEMENT...

Mr. Paul, a libertarian-leaning Republican from Kentucky and possible 2016 presidential hopeful, participated in a telephone conference call with members of a pro-immigration reform group and reporters in an effort brokered by anti-tax activist Grover Norquist.

The business group that helped set up the call, the Partnership for a New American Economy, immediately blasted an email Wednesday evening to supporters crowing that Mr. Paul had formally joined its pro-reform effort…

A top Paul aide confirmed the alliance of Mr. Paul and Mr. Norquist on immigration reform, after The Times received a copy of an email sent to Republicans, Democrats, independents and others thought to be open to some kind of reform.

“Rand made the calls on immigration reform with Grover this morning,” Doug Stafford, who heads Mr. Paul’s political action committee, told The Times

Grover Norquist’s purported role in tax policy has of course long been overshadowed by his open borders fanaticism.

Damage control is now in full swing. Paul has rushed out an Op-Ed at Breitbart.com EXCLUSIVE – Rand Paul: Secure the Border 12 June, 2012 which Drudge, perhaps reverting to a more disreputable phase of its history has flagged under UPDATE: Rand Paul says secure border first... shamefully removing the Washington Times link

This is merely a slab of U.S. Chamber of Commerce- style boilerplate, decorated with fancy border enforcement paintwork to fool the Rubes, but conspicuously dodging any comment on what to actually do with the illegals already here. Instead the tell-tale Open Borders cant:

Our nation is a nation of immigrants. Throughout history, our nation has been flooded with immigrants who have… assimilated into what we know today as America…We must embrace immigration and immigrants, and we must recognize that our country has been enriched by those who seek the freedom to make better lives for themselves.

Why in the immediate aftermath of the Cantor debacle has the admittedly maladroit Paul done this?

Simple: he and his parasite handlers are aspiring to Cantor’s role as bagman to the Adelzuck Party. (On this see

Rand Paul is eager to hire on.