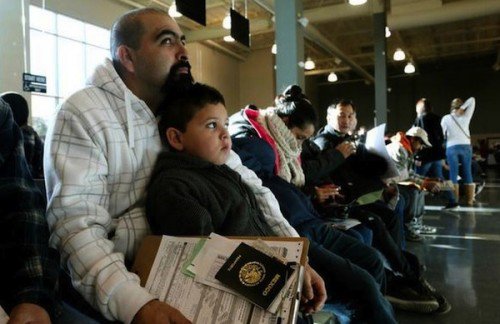 California: More Than Half of New Driver’s Licenses — 397,000 — Have Been Issued to Illegal Aliens

Above, Mexicans await their DLs in the Orange County DMV.

Here in California, the illegal aliens are snapping up their mini-amnesty driver’s licenses like hotcakes. Apparently the government suits had feared that the skittish Mexicans et al would be too fearful to come pick up their highly desired DLs, but not to worry: they mobbed the DMVs.

And why wouldn’t they line up? It’s not like anyone gets deported during Obama’s latter days. And the foreign lawbreakers don’t even pay for the added costs of providing the goodies — an estimated $141 million in processing costs over three years which the California taxpayers subsidize.

The Democrats who run the place let taxpayers know who rates special treatment in this state — and it certainly isn’t the law-abiding people who pay the bills.

“There are now 400,000 more signals to people all over the world that working illegally in California is encouraged by the government itself,” Roy Beck of NumbersUSA observed about the roaring license distribution.

And it’s not like the state is producing spare jobs for millions of newbie foreigners. The state unemployment rate as of June was 6.3 percent, one whole percentage point worse that the national rate of 5.3.

With all its natural blessings, California should be booming. But it’s run by Democrats.

More than half of the driver’s licenses California has issued in 2015 have gone to residents living in the country illegally, reflecting the success of a new law extending licenses to people regardless of residency status.

A new California law offering licenses to undocumented immigrants has proved enormously popular. Nearly half a million people applied for those licenses between the start of 2015 and early April, exceeding the pace of California Department of Motor Vehicles’ expectations for 1.4 million applications over three years.

“I think it was a surprise how many people actually came in in the first six months,” said Jessica Gonzalez, a DMV spokeswoman.

While the surge initially meant customers faced longer wait times and had difficulty making appointments, Gonzalez said those logistical issues have eased as the initial rush subsided and the DMV made more appointments available to people who are renewing licenses and registering vehicles, rather than filing initial license applications.

“It did take a little bit of time to get us acclimated, and now we’re seeing wait times trending down,” Gonzalez said.

Immigrant advocates and Democratic allies pushed the new law, which passed in 2013 and took effect this year, as a way to ensure that undocumented immigrants already on the roads undergo DMV training and buy auto insurance.

Since insurers do not need to report to the state who buys policies, the California Department of Insurance did not have data available on whether the boom in new license-seekers has led to increased auto insurance sales. But Nicole Ganley of the Association of California Insurance

“We do have members saying they’ve seen an increase,” Ganley said.

Supporters also argued the law would help a marginalized population step out of the shadows, although many worried that a population accustomed to avoiding scrutiny would be reluctant to reveal themselves to a government organization, even though the law prohibits the DMV from sharing information with other government agencies.

Advocates sought immigrant license cards that were only subtly different from other licenses, arguing that overly distinct licenses would expose immigrants to discrimination. The federal government rejected the DMV’s initial license design for being too similar to the traditional license design.

But the numbers suggest that the appeal of driving legally has trumped lingering fear of deportation or other consequences.

“None of those fears have turned out to be true,” said Assemblyman Luis Alejo, D-Watsonville, who carried the bill creating the new program. “Our roads are now safer knowing 400,000 people who were likely already driving are licensed and insured.”

It could also indicate that a massive public information push was effective. In the run-up to the law taking effect, lawmakers, DMV officials and advocates mounted a statewide campaign encouraging license-seekers to prepare by gathering the documents needed to prove California residency and studying for the road rules knowledge test.

“There has been a very strong community-driven effort to educate and prepare the community,” said Carlos Amador, lead organizer for the California Immigrant Policy Center. “It’s a great milestone for the community and really shows the desire for community members to integrate into society.”