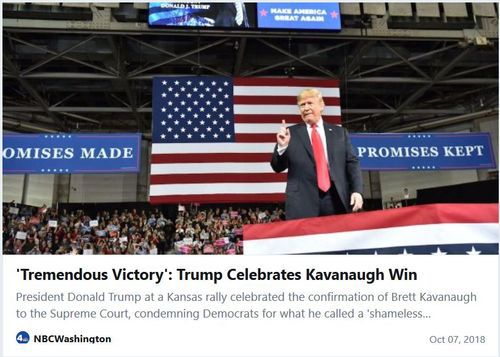 Successfully placing a conservative justice on the Supreme Court is a political victory that needs little explanation. Kavanaugh will shape the law for the next 30+ years, and immigration patriots should be pleased he made it on the highest court in the land.

But it isn’t just a political victory—it’s a huge triumph in the cultural war. Rarely does the Right net wins in this enduring struggle, but Trump has set a different course. He’s fighting a different kind of cultural war centered on secular disputes over national identity, race, gender, and political correctness.

The president has managed to gain ground in his cultural war against the immense power of the media and cultural establishment. Trump has shredded the boundaries of acceptable political discourse and allowed such forbidden ideas as a Muslim ban and immigration restriction to gain traction in the mainstream. He forced the NFL to crack down on its players engaging in protests against the National Anthem. The president knew these were demonstrations that castigated America as an evil force while boasting the implicit support of the nation’s most popular sports league. His attacks expressed the Silent Majority’s disapproval and unapologetic nationalism, and he made the NFL capitulate.

With Kavanaugh, Trump and the Republicans contended with #MeToo and the insidious belief that all accusations of sexual misconduct must be believed without question. If Republicans had caved in this fight, it would have opened up every GOP candidate and conservative to the terror of false rape accusations. The Left was gleeful about the weaponization of these accusations, knowing full-well the media would dutifully promote these smears to the public.

Kavanaugh’s confirmation deflated the power of this insidious tactic and showed a sizable portion of the population is revolted by it.

The pushback against #MeToo is vitally important for conservatives going forward. It’s a cultural revolution that seeks to destroy harmony between the sexes and our traditional legal norms. Conservatism could not exist in a world where #MeToo succeeds.

Saturday’s victory should give hope to rightists everywhere that a new era is approaching–one where the GOP finds a backbone and fights tooth and nail for the interests of their voters. If Republicans can persevere in the face of the anti-Kavanaugh onslaught, they can withstand the tsunami of hate if they pushed patriotic immigration reform.