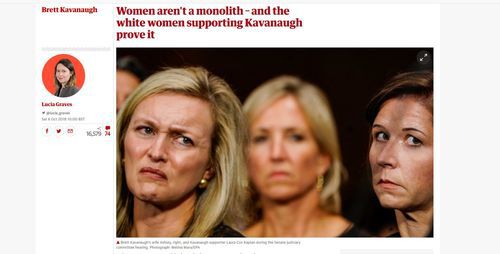 White women are as likely to believe Kavanaugh as they are Christine Blasey Ford, polls have found, continuing a long pattern of voting Republican

It would make sense that the people most likely to believe the testimony of Dr Christine Blasey Ford would be the ones who look like her: middle-aged, white women.

But polls and even a cursory glance at cable news show this not to be the case.

Fox News host Martha MacCallum said that following Ford’s testimony, she kept hearing from moms who “fear due process is dead”. If Brett Kavanaugh is denied a supreme court confirmation over Ford’s sexual assault allegations, these women fear their sons could be subjected to “an unfair precedent” one day. …

In other words, they’re thinking more of men than women, and no small number of white women seem happy to follow suit. …

So many were shocked earlier this week when a poll found that while minority voters overwhelmingly believe Ford over Kavanaugh, a breakdown of the data by gender revealed white women were nearly as likely to believe Kavanaugh as Ford.

“That is not an aberration, it’s the continuation of a long pattern of white women voting Republican,” said Julie Kohler, a senior vice-president for the Democracy Alliance, a network of major progressive political donors, who holds a PhD in family social science and writes about women’s voting patterns for the Nation. A full 69% of Republican women favor confirming Kavanaugh, according to a Morning Consult/Politico poll released earlier this week.

“White women are not by any means a monolithic voting bloc,” Kohler told the Guardian. Rather, they’re profoundly influenced by education, religion and especially marital status. …

And while African Americans voters supported Barack Obama with near unanimity, the so-called “women’s vote” never materialized behind Hillary Clinton. Instead, Trump won white women with 53% of the vote. …

The emphasis fits nicely with a recent study of women’s voting patterns, which found that while single women tend to cast votes with the fate of all women in mind, women married to men, and white women in particular, often vote on behalf of their husbands and families, research shows.

Clinton was pilloried for saying on the campaign trail that she came across women “under tremendous pressure from fathers and husbands and boyfriends and male employers not to vote for ‘the girl’”.

But plenty of social science backs her up.

There’s a study from the Institute for Social and Economic Research which found that wives in general vote in ways that support their husband’s economic interests. As well as the research showing that white women are particularly likely to do so – after all, the white men they typically marry still earn more than any other demographic.

Clinton’s comment about white women voting their husband’s interest has (ungenerously) been interpreted as meaning white women can’t think for themselves, but Kohler pushed back on that notion, as Clinton herself did at the time. “I don’t think it’s a matter of women not thinking for themselves. It’s about the way that larger structural inequalities are driven through institutions like marriage,” Kohler said.

While we see much more egalitarian marriages than we did a century ago, she noted, women weren’t able to have their own money or property before; and the concept of marital rape didn’t even exist until the 1970s.

“It’s not to say that every married woman is subjugated in her marriage. Of course that’s not true,” Kohler added. “But it is true that as an institution it has privileged men’s interests historically, and I think we still live with some of that legacy.” …

The recent polling around Kavanaugh would seem to lend further credence to insights about how white women vote when married.

White women, according Bureau of Labor Statistics data, are more likely to marry and stay married than women of other races – and marriage influences voting patterns significantly.

Kelsy Kretschmer, who teaches at Oregon State University and co-authored the recent study on single versus married women’s voting patterns, told the Guardian the Kavanaugh polling on white women and conservative talking points are very much in line with her own research. “It’s consistent with the ideas that we put forward in the paper, which is that married white women’s interests change, and they start to think about their husbands interests as their own,” she said.

But Kretschmer said their shifting priorities are more than an economic calculation – the shift is cultural, too. Research, including a study published in the Journal of Marriage and Family, has shown when women get married they have less contact with other women and more intense contact with their husbands and family, and that these ties influence political participation.

What’s more, white women and Latina women, the populations most likely to be conservatively influenced by marriage, according to Kretschmer’s study, are often in traditional marriages with male breadwinners. (By contrast, more than 80% of black moms are the breadwinners, according to findings from the Institute for Women’s Policy Research and the National Domestic Workers Alliance.) …

The Democrats needs a new motto: To Abolish Whiteness We Must Abolish Love!

White women must be prevented from falling in love with and marrying white men. White married women sympathize with their white husbands. Worse, they bear white sons!