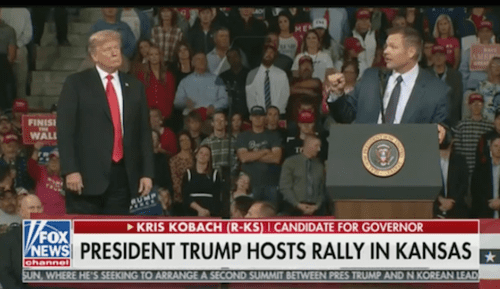 Donald Trump’s Topeka rally on Saturday contained a lot of celebration of Brett Kavanaugh being confirmed as a justice to the Supreme Court after weeks of Democrat accusations, but the President was actually there to promote Kansas candidates in the upcoming election, particularly Kris Kobach.

Below, Kris Kobach campaigned with the president at the Topeka rally to become governor of Kansas. 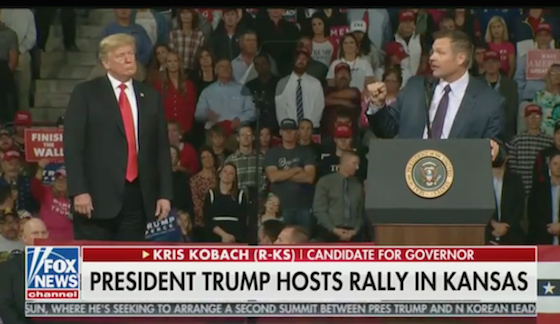 Kris Kobach is of course a long-time hero to the friends of law and borders. He was a major shaper of Arizona’s SB1070 law that sought to allow states to enforce immigration law if the federal government was unwilling to do so. See Time magazine’s 2012 interview, Q&A: Kris Kobach, the Legal Mind Behind Arizona’s Immigration Law.

Kobach, who is the current Kansas Secretary of State, spoke about his top issues at the rally — immigration enforcement and preventing voter fraud:

KRIS KOBACH: I want to give President Trump credit for something really important — it’s something he and I have worked together on; we’ve worked for on a number of things, but the most important is stopping illegal immigration. I’m so glad that America has a president who gets it and knows that illegal means illegal.

I want to tell you a quick short story about illegal immigration. I began working on this issue when I was an adviser to John Ashcroft at the time of 9/11. I was there during 9/11, and we all remember how the world changed, but let me tell you something that you may not know. All nineteen hijackers came into this country legally on temporary visas. Five of them became illegal mostly by overstaying their visas; four of those five were stopped by state and local law enforcement for speeding violations. They were illegally in the country at the time, but the cops didn’t know it and so they didn’t make an arrest even though they could have if they’d had that information at their fingertips. Now get this — three of those four illegal aliens that they could have arrested were pilots, so if they had made those arrests they could have stopped 9/11 from happening.

Those numbers have shaped my career: the gravity of that has never left me, and I will not and I know President Trump will not allow our immigration system to be used again as a weapon to harm the American people. Stopping illegal aliens is not just about jobs; it’s not just about crime; it’s about our nation’s security, and that comes first.

And illegal immigration’s at issue in this campaign for governor. Did you know that my opponent Laura Kelly voted to continue allowing sanctuary cities in Kansas? She did, she did. Look it up it’s in the roll call vote. When I’m governor, God willing, sanctuary cities will end in this state.

There’s another big issue, there’s another big issue that President Trump and I have both been concerned about — voter fraud. Because of the law that I drafted and the Kansas Legislature passed, Kansas now has the most secure election laws in America. Photo ID creates trust in our elections. If you need a photo ID to cash a check or to buy the kind of Sudafed that works, you probably ought to need one to go cast a vote in an election. And proof of citizenship too, proof of citizenship — every time an alien votes, every time an alien votes it cancels out the vote of a US citizen. You know the Democrats and their socialist friends claim they care about voter cancellation or voter suppression, but they don’t care about US citizens votes being cancelled out. It’s time for other states to require proof of citizenship too, just like Kansas.

Post
Trump In Erie, PA: "How The Hell Do You Have A Country If You Don't Have Borders?"

Post
Liberals: Informed By Their Ignorance ... And Adamant About It
MORE...
POPULAR TAGS