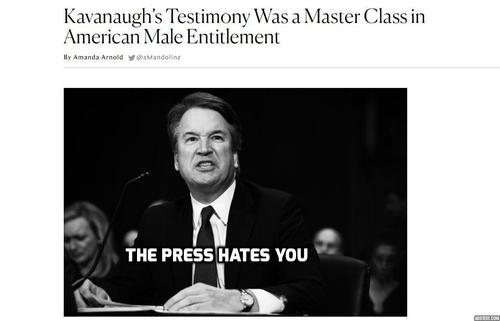 Journalists Display Their Hatred For Defiant Whites During Kavanaugh Hearing

For VDARE readers, there are two big takeaways from the hearing.

The first is that the Immigration Lobby’s favorite Republican—Sen. Lindsey Graham—surprisingly displayed the most fire in defending Kavanaugh, winning over many Trump supporters in the process. It should concern immigration patriots that Graham may develop clout among the Trump base, even when he is doing good things like standing up for Kavanaugh. The Watcher is keeping an eye on this development and will have a report on the subject in the very near future.

The main thing to discuss from the hearing today is the media’s growing anti-white animus. The Watcher argued earlier that liberal journalists were motivated to believe Kavanaugh was a rapist due to their WASPophobia, an implicitly anti-white phenomenon—see Ruling Class Thinks Kavanaugh Is Guilty—Of Being A WASP (Even Though He’s Irish Catholic).

But during the hearing, the anti-white sentiment of journalists turned explicit. All over Twitter, blue-check mark personalities raged against Judge Kavanaugh’s “white male entitlement.” Apparently, the judge reacting angrily to accusations he was involved in gang rapes was something only a privileged white male would do.

Reporter Luke Russert—a person who only has a career due to his father—tweeted, “Oh boy—Kavanaugh is going full angry belittled marginalized white man. Tough sell for today.” Russert added in a subsequent tweet, “If a woman or minority had an opening statement like that, they would be labeled hysterical and deranged. If you cannot see that as a white man—God love ya.”

Similar takes came from Steven Thrasher, Toure, and dozens of other media figures. It was especially rich for Kavanaugh to be attacked for showing emotion literally right after his accuser, Christine Blasey Ford, was praised to high heaven for her teary-eyed testimony.

The message is clear: white men must capitulate and not show any outrage at accusations from protected classes. If a woman calls him a rapist, he’s a rapist. If a minority calls him a racist, he’s a racist. And so on and so forth.

The only option for a white man is to hold your head in shame and beg for forgiveness. But Kavanaugh didn’t do that. He did what any normal man would have done after a false accusation that ruined his name and family: show outrage and attack the mudslingers who sought his destruction. That’s why the media was outraged—he didn’t follow their assigned script.

In 2018, our media and cultural elite have accepted anti-white racism as normal and righteous.

The good news is that Kavanaugh’s fighting spirit is the same kind of attitude that drew millions of middle Americans to Donald Trump. They didn’t see an entitled white guy lashing out—they saw an honorable man fighting to restore his good name.

Hopefully, at least 51 senators share that view and deliver a huge victory for the Trump movement by putting Kavanaugh on the Supreme Court.