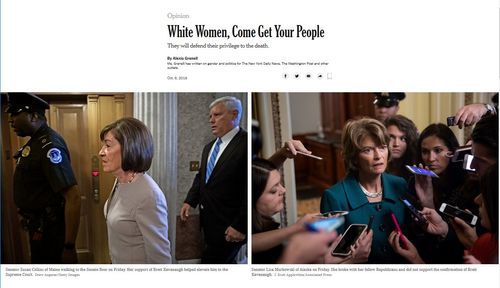 White Women, Come Get Your People
They will defend their privilege to the death.

By Alexis Grenell
Ms. Grenell has written on gender and politics for The New York Daily News, The Washington Post and other outlets.

But the people who scare me the most are the mothers, sisters and wives of those young men, because my stupid uterus still holds out some insane hope of solidarity.

We’re talking about white women. The same 53 percent who put their racial privilege ahead of their second-class gender status in 2016 by voting to uphold a system that values only their whiteness, just as they have for decades. White women have broken for Democratic presidential candidates only twice: in the 1964 and 1996 elections, according to an analysis by Jane Junn, a political scientist at the University of Southern California.

Women of color, and specifically black women, make the margin of difference for Democrats. The voting patterns of white women and white men mirror each other much more closely, and they tend to cast their ballots for Republicans. The gender gap in politics is really a color line.

That’s because white women benefit from patriarchy by trading on their whiteness to monopolize resources for mutual gain. In return they’re placed on a pedestal to be “cherished and revered,” as Speaker Paul D. Ryan has said about women, but all the while denied basic rights.

This elevated position over women of color comes at a cost, though. Consider what Kellyanne Conway, a top adviser to the president, said at a dinner last year for New York’s Conservative Party. She suggested that higher birthrates are “how I think we fight these demographic wars moving forward.” The war, of course, is with non-white people. So it seems that white women are expected to support the patriarchy by marrying within their racial group, reproducing whiteness and even minimizing violence against their own bodies.

… Betray the patriarchy and your whiteness won’t save you.

The pedestal is a superior, if precarious, place. For white women, it’s apparently better than being “stronger together,” with the 94 percent of black women and 86 percent of Latinas who voted for Hillary Clinton.

During the 2016 presidential election, did white women really vote with their whiteness in mind? Lorrie Frasure-Yokley, a political scientist at U.C.L.A., recently measured the effect of racial identity on white women’s willingness to support Trump in 2016 and found a positive and statistically significant relationship. So white women who voted for him did so to prop up their whiteness.

In the study, white women who agreed that “many women interpret innocent remarks or acts as sexist” were 17 percent more likely to vote for a Republican candidate. They were also likely to agree that “blacks should work their way up without special favors.” To be sure, women of color aren’t inherently less sexist or even without their own racial biases. But unlike white women, they can’t use race privilege to their advantage.

Look how Obama had to work twice as hard to get anywhere in life. If Obama had been white, he would have been crowned Galactic Overlord.

This blood pact between white men and white women is at issue in the November midterms. …

Meanwhile, Senator Collins subjected us to a slow funeral dirge about due process and some other nonsense I couldn’t even hear through my rage headache as she announced on Friday she would vote to confirm Judge Kavanaugh.

And in case you are wondering about the usual …