Immigration Enforcement Is Up, But Not Everyone Is Happy About It

Illegal alien sob stories may be experiencing a renaissance now that we live in the Trump Administration. Sunday’s New York Times presented a front page example — foreign job thieves are Fearful, oh my, that they might get a one-way ride to the dear homeland.

Naturally the miscreants are “immigrants” in the newspaper headline, as if they were legal. 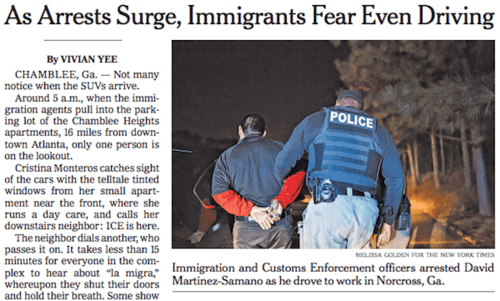 Why would anyone find it unusual that admitted lawbreakers react to the sight of police with alarm? The Times considers the situation to be news and worthy of a detailed sniffle saga.

‘Please, God, Don’t Let Me Get Stopped’: Around Atlanta, No Sanctuary for Immigrants,

CHAMBLEE, Ga. — Not many notice when the SUVs arrive. Around 5 a.m., when the immigration agents pull into the parking lot of the Chamblee Heights apartments, 16 miles from downtown Atlanta, only one person is on the lookout.

Cristina Monteros catches sight of the cars with the telltale tinted windows from her small apartment near the front, where she runs a day care, and calls her downstairs neighbor: ICE is here.

The neighbor dials another, who passes it on. It takes less than 15 minutes for everyone in the complex to hear about “la migra,” whereupon they shut their doors and hold their breath. Some show up late to work, and others skip it altogether. The school bus might leave some children behind.

Few places in the United States have simultaneously beckoned undocumented immigrants and penalized them for coming like metropolitan Atlanta, a boomtown of construction and service jobs where conservative politics and new national policies have turned every waking day into a gamble.

President Trump has declared anyone living in the country illegally a target for arrest and deportation, driving up the number of immigration arrests by more than 40 percent this year. While the Obama administration deported record numbers of undocumented immigrants, it directed federal agents to focus on arresting seri ous criminals and recent arrivals. The current administration has erased those guidelines, allowing Immigration and Customs Enforcement agents to arrest and deport anyone here illegally. . . . 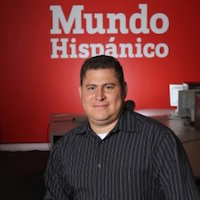 A little later in the piece, we come across Mario Guevara, a reporter for Mundo Hispanico, a Spanish-language paper in Georgia. I wrote about him in a 2013 VDARE piece, Let’s Have Immigrant Diversity in the Main Stream Media! where I noted his sense of entitlement after worming his way into the US, claiming asylum from El Salvador after he entered this country on a tourist visa. He was turned down for asylum in 2012 and was supposed to be deported, but apparently is still here.

Guevara hasn’t changed his crappy anti-American attitude in the years since then: he uses his Facebook page to warn illegal aliens about ICE activities so criminals can escape being arrested and deported:

Every morning, Rolando Zeron, a former civil engineer in Honduras who now fixes floors, maps his way to work after checking the Facebook page of Mario Guevara, a reporter for the newspaper Mundo Hispánico who updates his feed about ICE activity throughout the day.

Mr. Guevara, who has 250,000 Facebook followers and counting, is usually in his car by 4:30 a.m., gulping coffee and chasing tips from suburb to suburb.

Asked whether he had any reservations about helping readers evade immigration law, he said he preferred to think he was helping people with no criminal records stay in the country. “Honestly, I believe it’s an honor as a journalist if the people can use your information for protecting their own families,” he said.

What nonsense. Illegal alien ISIS members bent on mass murder jihad can use his information just as easily as Mexican job thieves.

Is it too late to deport the illegal alien collaborator Guevara? Inquiring minds want to know.