The Derb recently cheered nationalism as expressed in some elections throughout the world, Czechia, Kenya, and Japan where nation loving patriots came out on top.  This is a modern expression of the Tokugawa response to the coming of the black ships, Fukoku Kyōhei, Strong Nation, Strong Army.  But more importantly, Japan remaining Japanese in the modern world.  While commonly translated as Rich Country, Strong Army, the real meaning is a Japan that remains Japanese.  It is the expression of being Japanese in the wider, dangerous, world.

Wiser words were never written about the current situation in Japan.  [Links in the original! Thanks Derb!]

None of that applies in Japan. The Japanese people—including the elites! —like being Japanese. They don’t want to be replaced by foreigners, however much Wall Street Journal editorialists tell them they should.

I was remiss in not writing on the issue in Japan sooner, but thank the Derb for his observations on the recent events in Japan and for his links to your humble correspondent's work on the Japan issue.  I should have written sooner on the recent election since I just returned from a sojourn in the Land of the Rising Sun during the height of the election.

Two things emerged concerning observations made during that stay.  The first being that how little politics matter in Japan.  Japan has no political culture equivalent to the rest of the world, especially the West.  And in comparison to the Third World as well, as when elections happen, no one dies.  The Internet in Japanese has few political blogs.  Political blogging about Japan is essentially either by Japanophiles or those like the Wall Street Journal types who want to transform Japan into something not at all Japanese other than some tourist attractions.

During two weeks in Japan, politics is conducted basically in an odd, early 20th century manner.  Political posters, almost unknown in the United States, dominate political advertising.  Yet those posters are surprisingly understated.  Most are merely the photograph of the Prime Ministerial candidate or the PM candidate and the local Diet candidate.  Very low key.  The second method of campaigning is the public rally, not staged like American candidates in some large venue, but street-side.  I observed a few in Nagasaki during the campaign, but those were decidedly underwhelming.  There was little or no political advertising on television.  What little appeared on television were stump speeches at the aforementioned rallies on the news.  It appeared that the opposition was hyped by the Japanese networks, including state-run NHK, but not so obviously nation-busting like in the United States.

It is symptomatic of Japan's class system: Rulers, Samurai, peasants, and merchants.  Everyone has their position in life; a system of responsibilities and obligations.  The wide class of Japanese, perhaps 98% of the population just don't care that much about politics because Japanese politicians don't cause problems, like massive immigration.  The general response of people I know in Japan is that they don't care about politics, but fulfill their obligation to vote for the LDP for prosperity, continuity, and Japan.

While there the most common answer to my questions about politics, politicians on the television, or about campaign posters or rallies, generally from people I interacted with, mostly of lower middle-class small town countryside dwellers, was either uninterest or surprise at my interest. 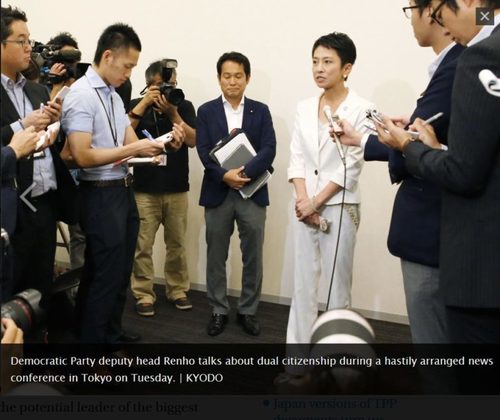 The only strong opinions I heard in Japan were directed against the now much despised Renhō Murata, the one-time leader of the opposition Democratic Party and an immigrant of sorts.  Her fall from grace, and despite idolatry in the western press, was quick and complete.  And no one in Japan has anything nice to say about her.  The only other issues that get the public exercised are nuclear weapons and the environment, of which, neither issue has the same cache it had 20 years ago.  In fact, the firewall against nuclear weapons is cracking.

“Japan should have the technology to build a nuclear weapon if it wants to do so,” the former defense minister said in a speech in Tokyo.

“But I don’t take the position that Japan should have nuclear weapons,” he said.

And compare the two Godzilla films, Godzilla Versus The Smog Monster and the latest, Shin-Godzilla. Generally, Godzilla movies were agitprop on various issues, mostly anti-American screeds involving nuclear weapons, and supported by the active measures agents of the KGB to sunder the alliance between Japan and the United States. When that failed, Japanese film makers adopted other issues, such as pollution.  And those films had an impact, but the Japanese government responded and the issues were dealt with.

The former was a lamentation and call to action against pollution, a real problem, resulting in reforms to pollution laws, the later a weak tea critique of the bureaucratic response of the Japanese government to the Tōhoku tsunami and resulting nuclear plant meltdown, but no real national political outcry.  The Japanese are content that they don't need to protect their street festivals from Muslim truck attackers.  Sonno Jo I!

And, as usual, the girly-men at the National Review were on the wrong side of history, just as they were on President Donald J. Trump.

Well, dozens of LDP legislators and ministers — including Japan’s prime minister, Shinzo Abe — are members of a radical nationalist organization called Nippon Kaigi, which believes (according to one of its members, Hakubun Shimomura, who until recently was Japan’s education minister) that Japan should abandon a “masochistic view of history” wherein it accepts that it committed crimes during the Second World War. In fact, in Nippon Kaigi’s view, Japan was the wronged party in the war.

If the new constitution is approved by two-thirds of each house of the Japanese legislature, its adoption will be voted on in a national referendum requiring a simple majority. Who can say if 51 percent of Japanese voters would vote against their own civil rights? On the one hand, it seems absurd; on the other, they did give the LDP’s coalition a two-thirds majority in both legislative chambers.

Yes, the Japanese people will vote for the new constitution because the Japanese see what is happening to the United States and Europe, overrun by immigrants and hate-filled minorities like Colin Kaepernick who hate the nation and the national anthem.  The neo-con girly-men just don't get it.  The Japanese do get it though.  No Muslims, no immigrants, no thanks, we're Japanese.