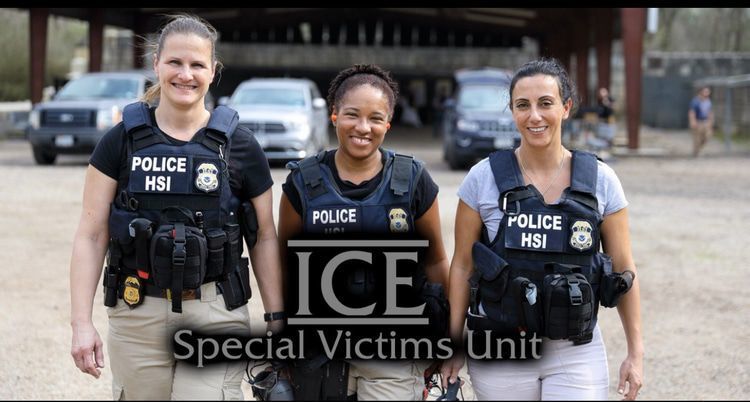 ICE SVU is bragging about their increased arrests and work-site enforcement, but it is all smoke and mirrors. ICE SVU instead continues its work as the sex police and, worse yet, expands catch-and-release for the few illegal aliens it arrests. The Customs pukes who run ICE SVU don’t care about what President Trump wants, the Dirty 19 who signed a letter attack Trump and immigration enforcement, continue to sabotage immigration enforcement, much as the FBI ran a sabotage campaign against President Trump. The only real question is why does President Trump allow both the FBI and ICE SVU to defy him. And where is Ken the Knife Cuccinelli regarding the continuation of the Obama Regime Administrative Amnesty?

First, catch-and-release continues, despite the claim by Mark Morgan, Acting Customs and Border Protection Commissioner that it has been “all but ended”. Now, your humble correspondent understands that CBP and ICE SVU are different components of the Department of Homeland Security (DHS), but the public does not understand the difference and thinks that the end of catch-and-release is for all of DHS. And ICE SVU doesn’t mind the deceit. Dozens of illegal aliens were arrested in a work-site raid by ICE SVU, but all of the illegal aliens were released to disappear and continue working at some other employer who looks the other way at obviously fraudulent documents.

Forty-six people suspected of being in the country illegally were discovered when federal immigration authorities and the Internal Revenue Service carried out search warrants at an Atlanta-area chain of Hispanic grocery stores Thursday, according to U.S. Immigration and Customs Enforcement.

ICE issued notices to 43 of them to appear in federal Immigration Court and then released them. It arrested three others – one Mexican and two Guatemalan store employees who had previously been deported — and took boxes of documents and computers from the Super Mercado Jalisco stores, said ICE spokesman Lindsay Williams.

And it is important to know that the Special Agent-in-Charge of ICE SVU in Atlanta is one of the Dirty 19. Nick Annan, right, also an affirmative action beneficiary, signed the letter attacking President Trump’s immigration enforcement priorities and is quite happy with catch-and-release.

ICE SVU is also bragging about their increase in criminal arrests. Unmentioned are their administrative arrests of illegal aliens, reports of which could not be found on their website. However, the ICE SVU website did not even mention work-site enforcement as something ICE SVU investigates, but the ICE SVU website did emphasize international art theft.

Homeland Security Investigations — ICE’s investigative arm — netted a record-high of 37,547 criminal arrests during the 2019 fiscal year, according to a Friday press release by the agency. The figure, which marked a nearly 10% increase from the previous fiscal year, reflected HSI’s increased effort to fight crime that extends well beyond the country’s borders. These arrests also resulted in the seizure of over $775 million in currency and assets.

While 37k arrests may seem like an impressive amount, remember that ICE SVU has 7,000 Special Agents. That works out to 5 arrests a year per agent. Not that impressive. Most police officers in a major city make 5 arrests a day, local detectives 5 arrests a week, ICE SVU agents are slacking. And given that there are 22 million illegal aliens in the United States, aggressive action by ICE SVU Special Agents should be much higher, for every adult illegal alien in the United States has at least one counterfeit document, usually at least two, a counterfeit Social Security Card and a counterfeit Form I-551, Alien Registration Card, or green card. But nothing prohibits, other than unofficial policy from the ICE Office of the Principal Legal Advisor (OPLA), to make administrative arrests of illegal aliens.

Furthermore, note that ICE SVU is bragging about increase of arrests unrelated to immigration, such as sex pests traveling to Thailand to molest children.

ICE also cracked down on child sexual exploitation in fiscal year 2019, with agents arresting 3,957 child predators and rescued or identified a total of 1,069 victims, according to the agency. ICE recently opened up the Angel Watch Center in Fairfax, Virginia, a facility dedicated to the prevention of child sex tourism.

Well, arresting sex tourists who travel to Third World nations is not a concern of a component of DHS that is supposed to be arresting the 22 million illegal aliens in the United States, all of whom are in the United States and violating a serious federal felony, usually related to counterfeit documents and identity theft. Let the Tamruat Haeng Chat do their job concerning crimes committed in the Land of Smiles.

The agency also oversaw a record-breaking year in narcotics enforcement, with HSI agents seizing more than 12,450 lbs of opioids, surpassing 2018’s haul by nearly fivefold. HSI also seized more than 3,600 lbs of fentanyl, and over 145,000 lbs of methamphetamine.

Of import also is that most of those drugs were seized initially by either Border Patrol Agents from drug smugglers coming over the border or by Customs and Border Protection Officers at Ports-of-Entry (POE). Almost none of those drugs were initially found by ICE SVU agents. So most of these statistics are either misleading or dishonest. Not surprisingly, ICE SVU had a press release on their criminal arrests, but no press release on their administrative arrests, likely because administrative arrests are so few and the Dirty 19 don’t care about illegal aliens.

Now, before the observant claim that ICE SVU has ramped up work-site enforcement, let’s examine the numbers.

ICE’s focus on workplace enforcement—targeting both immigrants working illegally and their employers—has intensified in the past two years. Homeland Security Investigations, the ICE arm that carries out criminal investigations, opened 6,812 new workplace cases in the 2019 fiscal year, up from 1,701 during fiscal 2016. The agency made 2,048 administrative arrests, primarily of illegal immigrants, up roughly 500 from the year before.

So, ICE SVU has been able to increase administrative arrests during work-site investigations by only 500 arrests. Again, there are 22 million illegal aliens in the United States, most of whom are working, and ICE SVU could only find 2,048? That is 0.2 arrests per ICE SVU Special Agent. So, for both criminal and administrative arrests, ICE SVU manages 5.2 arrests per agent? That is what is called deliberate sabotage. Note also that those 6,000 or so work-site investigations are not 6,000 raids. If there were 6,000 or more raids, that would be on the news. But sadly, most work-site raids are for show, mostly catch-and-release.

It is time for Ken the Knife Cuccinelli to crack some skulls at ICE SVU and get them working. Perhaps 100 ICE SVU agents can be assigned to do Area Control in the City and County of San Francisco, or Chicago, or Los Angeles, or New York City and be instructed to find any and all illegal aliens whether on the street, at day labor sites, at job sites, in welfare offices, or from lists of illegal aliens with driver’s licenses. Let’s see if they can boost their arrest statistics to over 0.2 arrests per agent.