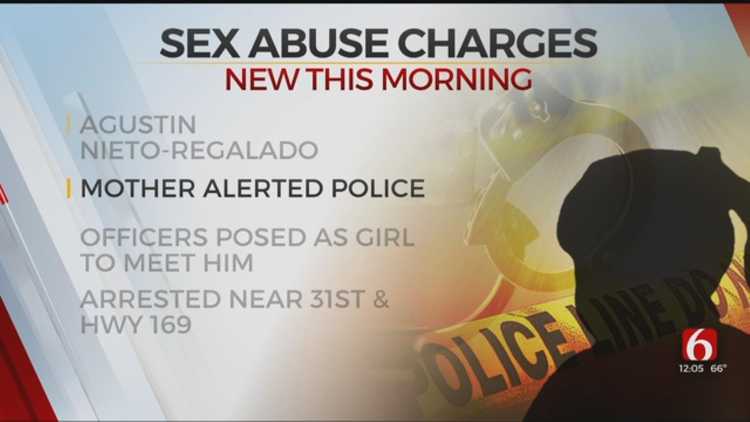 The Customs pukes at ICE SVU have accidentally arrested an illegal alien. Undoubtedly this arrest will result in disciplinary action by ICE SVU management and the ICE lawyers at the Office of the Principal Legal Advisor (OPLA) for arresting an illegal alien in violation of ICE SVU amnesty policy. But here is the accidental arrest: an illegal alien was allowed to live unmolested by Deep State saboteur Ryan Spradlin until he got involved in sex crimes.[Man Tried To Contact Victim He's Accused Of Molesting, TPD Says - News On 6, May 2, 2019] Otherwise Spradlin would be the first to amnesty this illegal by ignoring his illegal presence.

A man illegally residing in the United States was found guilty Wednesday in federal court of attempting to persuade online an 11-year-old girl to engage in sexual activity. Two years earlier, this man had also molested the child while she stayed at a friend’s house.

A jury convicted Agustin Nieto Regalado, 47, residing in Tulsa, for attempted coercion and enticement of a minor, and for possession of a false U.S. permanent resident card…

“Homeland Security Investigations special agents don’t initiate criminal investigations based on someone’s citizenship, we do so because of the alleged criminal activity and we will never relent in our efforts to protect children from anyone that attempts to exploit them,” said Ryan L. Spradlin, special agent in charge of HSI Dallas.

The important part here is that Spradlin was only concerned about the sex crimes aspect of Regalado’s crimes. If he had not gotten on ICE SVU’s radar attempting to molest a child, he would have been ignored. Ryan Spradlin is only interested in arresting Americans for sex crimes, not arresting illegal aliens for illegal entry, document fraud, or unlawful presence.

But back to normal—ICE SVU spent many investigative hours tracking down prostitutes and johns in Kansas City, but ignored the tens of thousands of illegal aliens in Kansas and Missouri.

A two-day human trafficking and prostitution sting operation in the Kansas City, Mo., area last week led to 21 arrests — including a suspect police say held a woman and her child hostage in their home for months, according to federal immigration authorities and a local report.

Jeffrey Higgins, 48, had allegedly refused to leave the victim’s Kansas home since June and forced her into prostitution, Fox 4 in Kansas City reported.

And no immigration charges, as all the suspects were Americans, something that the local police department could have handled. But ICE SVU had to get involved, rather than arrest illegal aliens.

No immigration charges, so this is not anything related to human trafficking of aliens.

In a separate announcement, ICE SVU said they were engaged in a human trafficking investigation, but there was only one charge of violating the Mann Act, or White Slavery Act, which does not mean international human trafficking, but bringing a woman across State lines to engage in prostitution. Still, for the most part, a local offense, as there is no Federal prostitution offense.

U.S. Immigration and Customs Enforcement’s (ICE) Homeland Security Investigations (HSI), and the Independence (Missouri) Police Department, arrested 21 individuals between Nov. 12 and 14 during an undercover operation to combat human trafficking and vice for various crimes, including prostitution, promoting prostitution, possessing controlled substances, and weapons offenses. One individual was charged with violating the Mann Act.

Note how the facts in the press release have nothing to do with any international human trafficking, but the rest of the press release is boiler plate on how ICE SVU is all about illegal aliens coming to work, but being disappointed in the working conditions.

Every day, HSI special agents around the globe work to uncover, dismantle and disrupt human trafficking. HSI employs a victim-centered approach, where equal value is placed on the identification and stabilization of victims, as well as the investigation and prosecution of traffickers.

Human trafficking victims have been found in communities nationwide in the agriculture, hospitality, restaurant, domestic work and other industries, as well as in prostitution that is facilitated online, on the street, or in businesses fronting for prostitution such as massage parlors. Overseas forced labor can be used to produce the consumer goods that are in our homes and workplaces. These victims are men, women and children of all ages and can include U.S. citizens and foreign nationals. Many of them thought they had found a good paying job or a better life, only to have their hopes dashed and work compelled.

ICE SVU is ignoring illegal aliens in favor of being the national vice squad, something that every city or county already has. Arresting Huggy Bear is what ICE SVU wants to do, ignoring the flood of illegal aliens and transnational gangs. Time for Ken Cuccinelli to fix this.