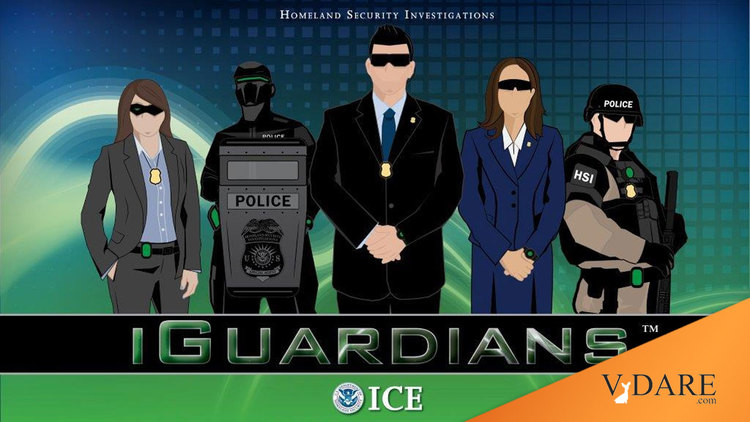 One of the strategies of the Obama Regime Administrative Amnesty was redirecting the resources of the Department of Homeland Security (DHS) and its major components to either non-immigration work within DHS, general nonfeasance in the area of immigration enforcement, or poaching the work of other Federal, State, and local law enforcement agencies.

One DHS component, to which I derisively refer to as ICE SVU, which is ICE Homeland Security Investigations (HSI), supposedly the investigative component of DHS in the area of customs and immigration law violations, drank deeply of the Obama Kool-Aid and became the sex police, the national bunko squad, and the car police as well. ICE SVU even hit the strip clubs to protect America from, well, nothing.

In a replay of the Obama Regime Administrative Amnesty, the Biden Regime has reassigned ICE SVU in the same manner. So now ICE SVU is ignoring the mass zerg rush of illegal aliens and the alien smugglers (coyotes, in the parlance of the border), all now just subsidiaries of Mexican drug cartels, who openly managed the flood and has assigned itself to the Bunko Squad again, this time poaching cases from the Department of Labor Office of Inspector General (DOL OIG), as well as the 50-plus State and possessions of the United States State Workforce Agencies (SWA),who are required by law to investigate fraud in the Unemployment Insurance program.

The excuse is that DOL OIG and the SWA are overwhelmed by the amount of fraud in the pandemic unemployment benefits. But the United States is also overwhelmed by illegal immigration, alien smuggling, and the associated drug smuggling. ICE SVU has no excuse to act outside its legal writ in the Homeland Security Act of 2003, but ICE SVU does not want to arrest illegal aliens, so they will do anything else.

This despite the fact that ICE’s Twitter profile says it does immigration work, terrorism investigations, and transnational crime. Two of the three are in fact in the primary jurisdiction of the FBI.

But here we have it, the return to the ICE SVU Bunko Squad.

Agents from HSI, U.S. Secret Service, Department of Labor Office of Inspector General, and detectives from the San Diego Police Department conducted the investigation into dozens of fraudulent applications that were submitted in July and August of 2020. During the investigation, law enforcement seized approximately $97,000 in U.S. Postal and MoneyGram money orders and $15,000 in U.S. currency from Cotton.

More important, this is the ICE SVU San Diego office, a border office where mass alien and drug smuggling is an occurrence not weekly, not daily, but hour by hour. One would think that a DHS component called Immigration and Customs Enforcement would have some customs and immigration cases to investigate and let the local bunko squad and the DOL OIG handle crimes in their area of expertise.

Perhaps we should not be surprised that the ICE SVU San Diego office wants to be a SWAT team rather than arrest illegal aliens.

But the Biden Regime Administrative Amnesty must continue at all costs.