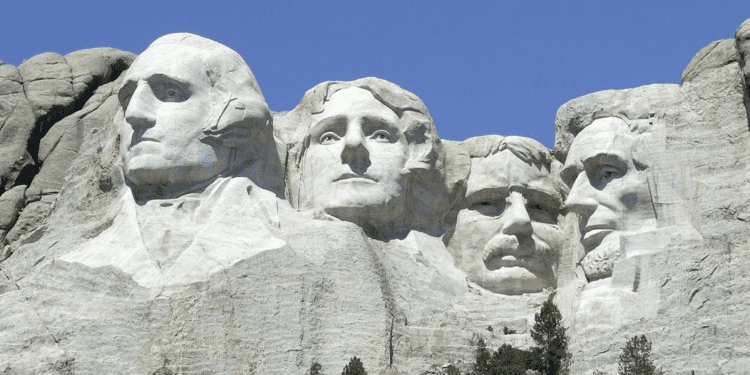 Until you realize the Left is coming after every aspect of American history, you’ll never comprehend they plan on ensuring nothing celebrating our past remains.

The Minnesota Star Tribune just posted an opinion piece that portrays Mt. Rushmore as a monument to white supremacy.

The editorial, penned by Ron Way (a former official of the U.S. Interior Department and its National Park Service), even features the KKK!:

But the back story of Mount Rushmore is hardly a rich history of a shared democratic ideal. Some see the monument in the Black Hills as one of the spoils of violent conquest over indigenous tribes by a U.S. Army clearing the way for white settlers driven westward by a lust for land and gold.

As it was in colonial America, the young country’s expansion was fueled by “Manifest Destiny” — a self-supreme notion that any land coveted by Euro-Americans was, by providence, rightfully theirs for the taking.

…The sculptures were chiseled by an imported Ku Klux Klansman on a granite mountain owned by indigenous tribes on what they considered sacred land — land that the U.S. Supreme Court said in 1980 was illegally taken from them.

[Way] continues in this vein, creating the most delusional piece of historical analysis I have ever seen published. Considering I have read books tying ancient Egypt to extraterrestrials, this is a remarkable achievement:

Abraham Lincoln famously emancipated slaves, but he supported eradicating Indian tribes from western lands and approved America’s largest-ever mass execution, the hanging of 38 Dakota in Mankato for their alleged crimes in the 1862 war along the Minnesota River. [VDARE.com Note: 800 whites were killed in the Minnesota Massacre, which a contemporary commenter described as "one of the bloodiest that has ever occurred in the history of the Indian races in North America. "]

Even the orientation of the monument is racist!:

The faces of the four presidents (white conquerors) peer southeast toward a reservation housing vanquished Lakota, who mostly live out forgotten, impoverished lives in the shadow of their sacred Paha Sapa that, legally, still belong to them.[ More]

Attacking monuments to the Confederacy across the southern states was just the start. How long until the call comes to implode Mount Rushmore for daring to celebrate dead white males?

Probably much closer than you think.