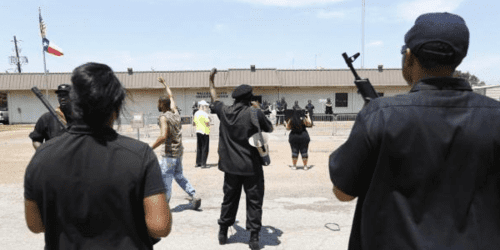 A few weeks ago, armed members of the New Black Panthers (above) marched on a jail in Texas, screaming they would "off the pigs."

A group of New Black Panther Party members bearing arms marched on to a jail in Waller County, Texas, calling for death to “the pigs” and affirming “the revolution” has begun.

In what I'm sure is an unrelated coincidence, a Texas sheriff was ambushed and shot to death in his car only a few days ago. A suspect was recently arrested. 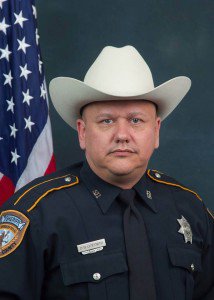 A Texas man faces a capital murder charge in the "execution-style shooting" of a sheriff's deputy while he was fueling his patrol car near Houston, authorities said.

Deputy Darren H. Goforth was in uniform when he was shot in the back Friday night in what authorities described as an unprovoked killing... 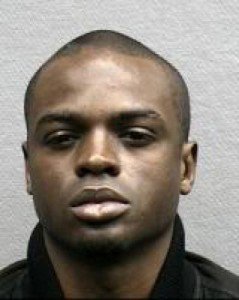 The motive in the shooting... is still unclear. But Goforth appears to have been targeted "because he wore a uniform," the sheriff said.

But this hasn't stopped everyone's favorite astroturfed, billionaire funded "social movement" Black Lives Matter from deploying some, shall we say, "problematic" rhetoric of its own.

Traffic disruptions and loud messages aren’t the only things memorable about Saturday’s Black Lives Matter march to the gates of the Minnesota State Fair.

One of the chants heard from protesters is being called “disgusting” by rank and file St. Paul Police officers. Police Federation President Dave Titus says the threatening refrain is divisive, dangerous and won’t lead to improved police relations...

But along the way, protesters broke into a pointed refrain that has St. Paul police officers upset.

Marchers chanted in unison, “Pigs in a blanket, fry ’em like bacon...”

“It definitely wasn’t a threat. I don’t know if they would have received it differently if we would have said on a stick. We’re there chanting, using our voices,” Turner said.

It's worth noting how Mr. Rashad Turner doesn't even admit that there's something wrong here. Instead, he even escalates slightly, making reference to the "pigs" being "on a stick." Yet at no point will Black Lives Matter ever be called to account for its rhetoric, even though the bodies continue to pile up.

Every time there is an act of violence by anyone, the temptation is to ascribe political meaning to the act. The Southern Poverty Law Center seems to base its efforts on the assumption that what they call "hate speech" eventually leads to "hate crimes." However, this kind of calculation only goes one way in the eyes of the Main Stream Media.

The rare white on black crime is a "hate crime" but black on white crime is simply "random," a function of someone being in the "wrong place at the wrong time." Even when there is a racially motivated killing, as in last week's on air murder of a reporter and her cameraman, it is quickly decreed that the real act of hate is not the crime itself, but pointing out the hateful motivations of the black killer. And each crime is almost welcomed as an opportunity to push for the elimination of things progressives don't like.

If the killer is white, the problem is the Confederate flag and old statues on college campuses in different states [University of Texas removes statue of Confederate President Jefferson Davis from campus, Fox News, August 31, 2015]. If the killer is black, the problem is the gun [Virginia reporter's father vows to fight for gun control, by Eric Bradner and Ashley Fantz, CNN, August 30, 2015].

In the case of Black Lives Matter, the line of separation between a political movement and acts of violence is becoming increasingly thin. When you have Black Lives Matter chanting thinly veiled threats of violence against cops, and cops are then targeted and killed, it's not unfair to say there's some connection. After all, BLM has moved beyond simply criticizing the police and is now dehumanizing them and calling for them to be "fried," even hours after a man with a wife and family was shot to death for just sitting in his car while in uniform.

There simply is no equivalent on the Right to this kind of rhetoric by a "mainstream" group. If BLM protests were coming from the Right and there was this kind of a violent aftermath, the group in question would have been disowned and probably banned. But because it is coming from the Left, BLM will never even be criticized. Being on the MSM's good side means you never have to say you're sorry.