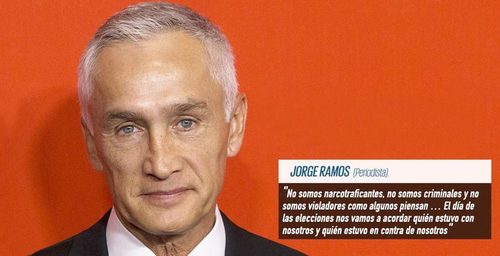 In a previous blog, I discussed "Welcome to Trumpland", an opinion piece by Jorge Ramos, in which he envisages what to him would be the horror of an America with secure borders and a sane citizenship policy.

On Sunday the 30th, Jorge was interviewed on ABC where he threatened Trump with the powerful Latino Vote.

Sunday on “This Week With George Stephanopoulos,” while discussing his confrontation with Republican presidential front-runner Donald Trump last week at a press conference, Univision anchor Jorge Ramos said next year at the polls Latino voters “won’t forget,” Trump “promoting in his speeches bigotry and hatred.”

This is not the first time Ramos has used such threatening language. See The Ultimatum of Jorge Ramos - "With Us Or Against Us" from just seven months back.

Why is the Hispanicization of America politics marked by such threatening language? Isn't immigration a public policy issue that can be discussed like any other? Apparently not now. As Ramos puts it "Immigration is Personal" and that's the problem.

Ramos said, “I think it’s very important that as journalists we challenge those who are in power."

"Challenge those in power?" Jorge Ramos is part of the Open Borders/Globalist/Multiculturalist/Cheap Labor/Raza power structure. It's those in favor of border control who are "challenging the power".

And I think it’s very dangerous that he wants to do the largest  mass deportation in modern history, that would cost more than $137 billion.

Even if it cost that much, it'd be worth it in the long run. But once the government got serious about immigration, many illegals would self-deport, saving the expense of deporting them. So that figure could well be an exaggeration.

And I think it’s very dangerous that he’s promoting in his speeches bigotry and hatred against immigrants.

Once again, immigration is a public policy issue, and we ought to have the freedom to debate it. But that's what Jorge doesn't want.

After I was expelled from that press conference, I saw a man, a Trump sympathizer who said, get out of my country. Interesting because I’m also a U.S. citizen, but this happened just seconds after he told me, go back to Univision. Those messages of hatred that’s precisely what Trump is promoting.”

Ramos is technically a U.S. citizen (and still a citizen of Mexico) but is he promoting the interests of the United States?

He added, “If Donald Trump wants to change this country the way he’s proposing, he has to be challenged..."

You've got it backwards, Jorge. You want to change this country, Trump wants to American nation to get it back.

And this is what’s going to happen. Latinos won’t forget this."

60 million Latinos will go to the polls next year and, just to put in perspective, that number, President Barack Obama won by less than 5 million votes.".

In other words, Latinos could define this election.

I suggest you watch the video (above) just to see how arrogant Jorge Ramos is.