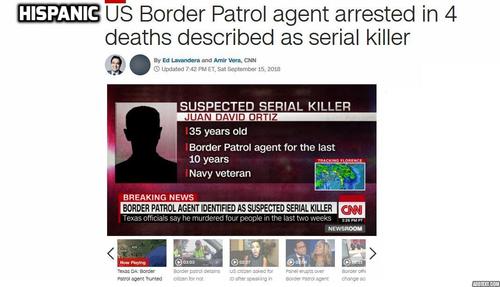 A Hispanic Border Patrol agent has been arrested in Webb County for killing four people.

(CNN)A US Border Patrol agent arrested in connection with the slayings of four people and the kidnapping of a woman who escaped was described by authorities as a serial killer who hunted for his victims.

The bodies of three females and one male were found over the past two weeks, sheriff's spokesman Eduardo Chapa told CNN. Chapa said investigators are not ruling out the possibility of more victims.

Alaniz would not specify how the victims were killed but said the "methods and means" of the slayings were similar. All of the women were prostitutes, the district attorney told CNN affiliate KGNS-TV. Alaniz also said the male victim was believed to be a prostitute.

"He was profiling certain kinds of victims," Alaniz said, adding "the suspect was hunting for his victims." The prosecutor says he feels comfortable describing Ortiz as a serial killer.

It was not immediately known whether Ortiz has an attorney.

Andrew Meehan, a US Customs and Border Protection spokesperson, said in a statement to CNN that the agency is fully cooperating with investigators.

"While it is CBP policy to not comment on the details of an ongoing investigation, criminal action by our employees is not, and will not be tolerated," his statement read. "Out of respect for the victims' family and friends, we ask that deference and due process be given to the investigation so that all the facts are brought to light and they can receive the closure they deserve."

Alaniz said the case broke Friday when a woman was reportedly kidnapped and escaped. The victim called the police and Texas state troopers got to her first.

The victim was able to provide a detailed description of Ortiz, including his tattoos, Alaniz said.[More]

The District Attorney of Webb County is also Hispanic, of course. That's because nearly everyone in Webb County is. Webb County, which is on the Mexican border, is 96 percent Hispanic, which is why I suspect the victims to have been Hispanic.

This is obviously  a much worse than usual problem caused by the Border Patrol's habit of hiring Hispanics to police the Mexican border, but remember, such problems have been endemic for years—the VDARE.com items below go back to 2006: