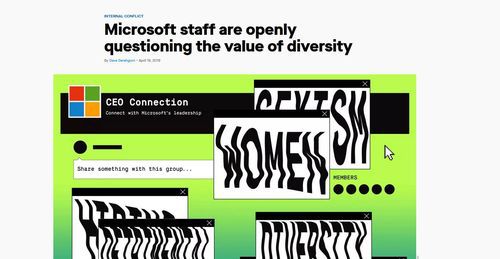 Back in the 1990s, Bill Gates got to be the richest man in the world by hiring smart workers who are disproportionately male and white or Asian. Like Hollywood, the tech industry was largely considered immune to the usual diversity regulations afflicting less glamorous parts of corporate America, up through their checks to the Obama re-election fund clearing. Since then, however …

Microsoft staff are openly questioning the value of diversity

Some Microsoft employees are openly questioning whether diversity is important, in a lengthy discussion on an internal online messaging board meant for communicating with CEO Satya Nadella.

Two posts on the board criticizing Microsoft diversity initiatives as “discriminatory hiring” and suggesting that women are less suited for engineering roles have elicited more than 800 comments, both affirming and criticizing the viewpoints, multiple Microsoft employees have told Quartz. The posts were written by a female Microsoft program manager. Quartz reached out to her directly for comment, and isn’t making her name public at this point, pending her response.

“Does Microsoft have any plans to end the current policy that financially incentivizes discriminatory hiring practices? To be clear, I am referring to the fact that senior leadership is awarded more money if they discriminate against Asians and white men,” read the original post by the Microsoft program manager on Yammer, a corporate messaging platform owned by Microsoft. …

“I have an ever-increasing file of white male Microsoft employees who have faced outright and overt discrimination because they had the misfortune of being born both white and male. This is unacceptable,” the program manager wrote in a comment later.

When contacted by Quartz, Microsoft pointed to comments by three company officials in the message-board threads. A member of Microsoft’s employee investigations team responded to the initial post in January, writing that the company does not tolerate discrimination of any kind. Another Microsoft staff member, who leads the team that helps the board of directors determine executive pay, explained the diversity-based compensation initiative. “Our board and executive leadership team believe diverse and inclusive teams are good for business and consistent with our mission and inspire-to culture,” she wrote. “Linking compensation to these aspirations is an important demonstration of executive commitment to something we believe strongly in.

In other words, when Microsoft discriminates against white males, that’s not discrimination, that’s punching up. The Microsoft Corporation (market cap $946 billion) is down and its white male minions are up. Plus, as CBS explained last week, punching Nazis is good, and all Nazis were white males, so there you go: Microsoft is punching up at its Nazi underlings.

The Microsoft author echoes former Google employee James Damore, who in 2017 wrote a memo that went internally viral at Google, leaning on pseudoscience to argue that women aren’t cut out for the tech industry. Damore was fired for breaching the company’s code of conduct amid enormous public and internal controversy, and Google CEO Sundar Pichai wrote in a memo that the firing was due to “advancing harmful gender stereotypes in our workplace.”

Google (market cap $861 billion) was punching up at a white worker. Susan Wojcicki, CEO of Youtube, is a woman, and therefore has more intersectional Wokemon Points than Damore, so her getting Damore fired for Damore defending Susan’s own hiring results was stunning and brave.