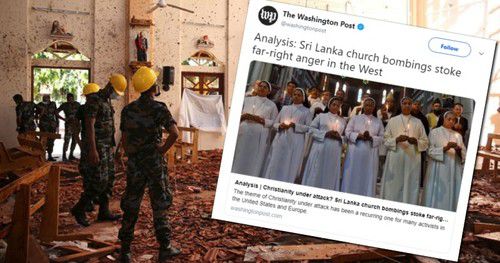 You wouldn’t want to be “far-right,” now, would you? So don’t be angry. These things just happen. It’s not like there is a Who who does things to a Whom. Instead, stuff just happens. Only angry far-rightists notice whom it happens to.

Sunday’s bombings in Sri Lanka marked the country’s deadliest violence in a decade, leaving 290 dead and more than 500 injured. But the attacks, which targeted a religious minority in a predominantly Buddhist country, also resonated abroad — especially in Europe.

To some, it was further proof that Christians in many parts of the world are under attack. Several churches were targeted in Sunday’s bombing attacks, along with hotels and a banquet hall. At one Catholic church in Negombo, more than 100 people were killed. The attack took place on Easter, one of the most important dates on the Christian calendar.

“My thoughts are once again with the persecuted Christians around the world,” Marine Le Pen, president of France’s far-right National Rally party, wrote in a tweet on Monday. Those who died on Sunday were “targeted for their faith,” she added.

Le Pen, like some other European far-right leaders, had initially offered only vague condolences to victims of the bombings on Sunday. However, after Sri Lankan officials blamed a local Muslim militant group, National Thowheed Jamaath, for the attack on Monday, European far-right groups and activists began to describe the attacks in specifically religious terms.

Regional branches and sites associated with Germany’s far-right Alternative for Germany (AfD) party framed the Sri Lankan bloodshed as an attack “against us Christians,” even though the party officially claims to be open to members of all religions, including Jews and Muslims.

Local party branches in the city of Solingen and eastern Germany lashed out at journalists for initially refraining to establish a link to Islamist terrorism. Some far-right groups claimed hypocrisy and double standards, arguing that attacks on Christians failed to receive the same response as attacks on Muslims.

Social media accounts that appeared to be associated with supporters of far-right groups drew connections to the Christchurch attacks, arguing that shooting sprees at two mosques in New Zealand were condemned as anti-Muslim attacks early on, whereas governments and media outlets were more cautious in the case of Sri Lanka.

… American far-right activists offered their own responses. “Followers of Jesus worldwide are being killed and otherwise terribly persecuted every day,” Frank Gaffney, a former Reagan administration aide now best known for his anti-Muslim rhetoric, said on his radio show. “All too often, their losses go unremarked.”

Similar sentiments were stated on a page on Reddit devoted to support for President Trump, with multiple posts criticizing Obama and Clinton for using the phrase “Easter worshipers” rather than Christians.

The theme of Christianity under attack has been a recurring one for many activists in the United States and Europe. Gaffney drew criticism for linking a devastating fire at Paris’s Notre Dame Cathedral last week to attacks on “Christian houses of worship” in France and what he suggested was a Muslim-led campaign against Christianity.

French government statistics do show hundreds of incidents of vandalism against churches last year, although the vast majority of acts were minor. Officials later confirmed that the fire that destroyed Notre Dame was accidental.

Really? All I can find online a week later are articles from last Thursday saying: “On 18 April, a judicial police official unofficially reported that investigators think a short circuit was the most likely cause.”