Flight From White: Australian Aboriginal Population Grows 25% In A Half Decade

Earlier: Sailer In TakiMag: The Flight From White Down Under and Meanwhile, In Australia, The Aborigines Are Looking Very Pale

From the New Daily in Australia:

The Stats Guy: Increase in Indigenous population a proud moment for Australia

There is plenty of work to be done to close the gap, but the trend is going in the right direction.

Earlier in the week I was able to have a sneak peak at the Census data. The joys of writing a column include getting embargoed press releases the night before data is officially launched.

One figure, more than anything else, jumped out at me. Australia’s Indigenous population went up steeply to 813,000 people (3.2 per cent of the population).

This increase of 25 per cent compared to 2016 data is huge. Obviously, this increase can’t, by definition, be driven by migration and wasn’t the result of an outrageously high birth rate either. Rather, more people self-identified as Indigenous on the census form.

Social progress always feels painfully slow for the relevant cohort but zooming out, looking at longitudinal data, allows us to be much more optimistic about societal trends.

We collectively created an environment where more people are confident enough to proclaim their heritage loudly and proudly. 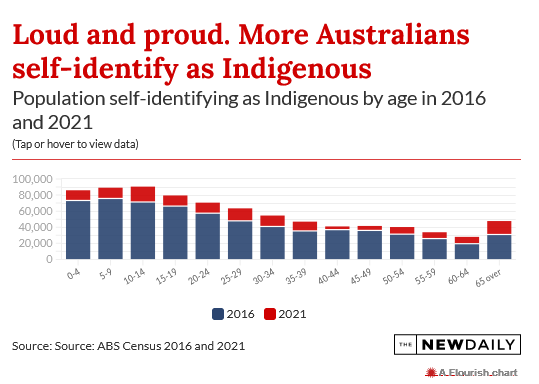 There is plenty of work to be done to close the gap, but the trend is going in the right direction.

Let’s have a look at what the census data teaches us about the Indigenous population in Australia. This journey through the data shows how big the gap is, but it also shows that we are making progress.

… There is still a 16 per cent household income gap. The median Indigenous household takes home $78,000 per year, while the median figure in Australia lies at $91,000. Same story as with the age data – there is a big gap but it’s narrowing.

Indigenous incomes grew faster (+25 per cent) over the past five years than the Australian average (+21 per cent). …

In contrast to Billy Wilder’s line for Greta Garbo in Ninotchka, “The last mass trials were a great success. There are going to be fewer but better Russians!” the Australian Establishment’s theory seems to be to concoct more but better Aborigines.