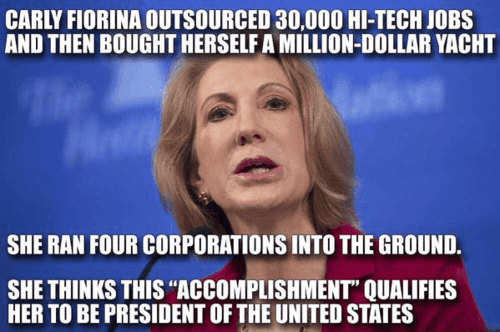 Fiorina's past political history suggests that her struggles at HP could be a campaign killer.

In 2010, Fiorina was running surprisingly close to California Sen. Barbara Boxer (D), who was struggling in a strong election cycle for Republicans nationally. Then, Boxer ran this ad focused on Fiorina's time at the helm of HP.

The commercial notes that Fiorina laid off 30,000 workers at HP while feathering her own nest (the ad's narrator says she tripled her salary) and buying a "million-dollar yacht" and "five corporate jets." It went up on TV in the middle of September and effectively ended Fiorina's chances.

The ad functioned as a sort of knock-out punch for Boxer even in a year where Republicans claimed victories all across the country.

Actually I think the more powerful Boxer ad was this one

It features a number of Hewlett Packard employees recounting how Carly Fiorina’s boneheaded outsourcing devastated their lives. One says she had to train her replacement, no doubt an H-1B slave.

However I agree the first had the better slogan

Of course Boxer made no mention of Fiorina’s terrible insourcing (immigration) record because she favored that.

California’s GOP is notoriously stupid as I noted in To California GOP Leadership (Again): LOSE WHITE VOTE, LOSE STATE!!! when their hapless 2014 (Hindu) Gubernatorial candidate lost even the White vote.

But with this record, what Fiorina thinks now is immaterial. Why would the national GOP saddle themselves with such a vulnerable certain loser?