Fidel Castro Is Dead: Can We Have Miami Back?

In the 1990s, Peter Brimelow did an article for Forbes on  The cost of Castro (March 23, 1998) in which he pointed out that incomes had gone down with, at that time,  only 40 years of Communist rule, the last 10, at that point, without the backing of the former Soviet Union. Cuba is really poor, and it's only Communism that keeps it poor. 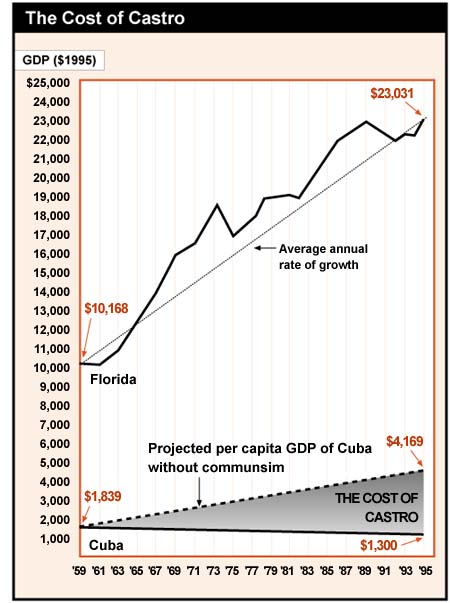 WHAT IS THE COST of Castro? Communist economies are notoriously tricky to estimate, but it appears that Cuba’s inflation-adjusted per capita income has actually fallen since Fidel Castro’s revolution in 1959 (see chart). In dramatic contrast, Florida, just 90 miles to the north, has boomed — as have other Sunbelt states like Texas and Arizona. Their revolution was air-conditioning. And it worked.

To estimate the cost of Castro, we assume that Cuba’s current per capita output should be about the same proportion of Florida’s output as it was in 1959. This gives us a current figure ($4,169), more than three times higher than Cuba’s actual output ($1,300), modestly placed between that of Jamaica ($3,200) and of Mexico ($7,700).

In fact, Cuba would probably have done considerably better than this.

A 1956 U.S. Department of Commerce guide for businessmen flatly said that “Cuba is not an underdeveloped country in the sense usually associated with that term,” citing its infrastructure, industrial development and large middle class. [VDARE.com Note: Large WHITE middle class—i. e. people like Ted Cruz and Marco Rubio.]Its living standards were reported to be among the highest in Latin America — then.

A hint of what might have been: Even troubled Mexico’s per capita GDP has closed in on the U.S. quite considerably over the last four decades – from less than an eighth in 1959 to about a third recently. Still, our modest estimate suggests that the shortfall in Cuban GDP as a result of Castro was a hefty $31.5 billion in 1995.

In the language of takeover artists, Cuba is an underperforming asset. Not all of this value could be realized immediately, of course – but enough to suggest it would be well worthwhile to offer Fidel a very golden handshake (say $5 billion) to retire to Spain.

Or maybe one of his middle managers may try an LRO — leveraged rubout? 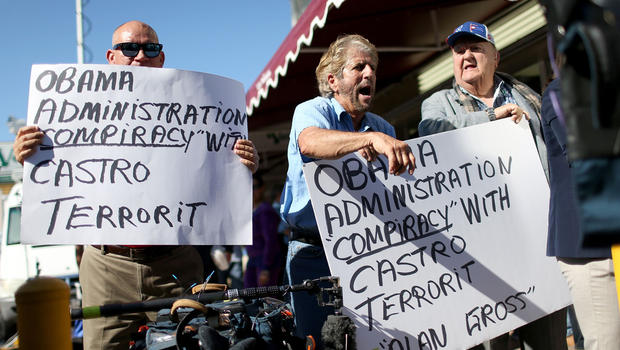 Neither the buyout or the "leveraged rubout" happened, and in 2014, when Obama was being friendly enough with Cuba (pictured right, white Cuban-Americans protesting)  that even the Washington Post complained, Peter Brimelow wrote

I thought this argument was strong enough, but additionally, remember, this was after the Soviet Union collapsed in 1991, taking with it the subsidies that were actually keeping the Cuban economy afloat. The Castro regime’s subsequent survival, at a time when even Hoxha’s Albania and Ceausescu’s Romania fell, was simply incredible.

It’s an interesting question why the U.S. has not bribed and/ or bullied the Cuban regime into stepping down, as it did the Afrikaners government in South Africa (democratically elected from within the white community, which is more than Castro can say).

For that matter, why didn’t the U.S. just invade Cuba after the Soviet Union 1991, when it was completely isolated and falling apart? We invaded Iraq and Afghanistan, didn’t we? At least by invading Cuba, we could have got Miami back.

Maybe because using the U.S. military  to defend the national interest might have given Americans the idea it could be used to seal the border?

However, I want to address one thing: this happy event may result in increased Cuban immigration to Florida, where there's already a Cuban colony. Perhaps, instead, some migration should flow the other way?

And if what we get is a huge Cuban refugee boatlift, I want to remind you of my 2001  modest proposal for dealing with refugees, addressed to the then President of Mexico: Dear Mr. Fox: Please Find Attached our Poor/ Tired/ Dispossessed, Etc.

If a large number of Spanish-speaking refugees are leaving Cuba, there's no reason why the United States can't route them south to Mexico, which must be experiencing labor shortages now, and which can always use new entrepreneurs.

And if the Mexicans don't want to accept them, they can explain it to President Trump.