Panga Boats And The Halls Of Montezuma

Here is a link to an article about the most recent incident of panga boats landing in Santa Barbara County. The suspects are from LA it says. Yeah, right: 18 Arrests Made in Arroyo Quemada Panga Incident | Authorities Make Big Bust on Santa Barbara Coastline, Santa Barbara Independent, Monday, September 16, 2013. 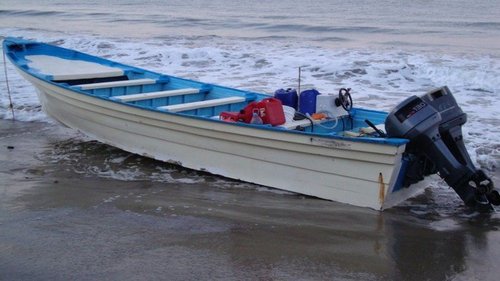 In order to  sail a boat that size from the Mexican coast to the Santa Barbara coast, the Mexican marijuana smugglers have to stop at one of Mexico's unoccupied Coronado Islands, and when this happened before, Peter Brimelow suggested that the US Marines seize it, to prevent this continuing violation of American sovereignty. [Thought For Veterans Day: Why Not Occupy Mexico's Smuggle Island?] This provoked an angry letter from a Mexican reader, because it seems that Mexicans  really  care about their sovereignty.

Unfortunately, the current American government doesn't. The Marines are much more likely to be deployed to the "shores of Tripoli"  mentioned in the Marines Hymn than to the Halls of Montezuma, also mentioned.

This is too bad, since that sort of thing—defending America around islands, rocks and shoals—is what Marines are actually for. But as Peter Brimelow wrote, "simply to suggest this idea makes you realize how strange it has become to expect that U.S. forces should be deployed in the U.S. national interest."