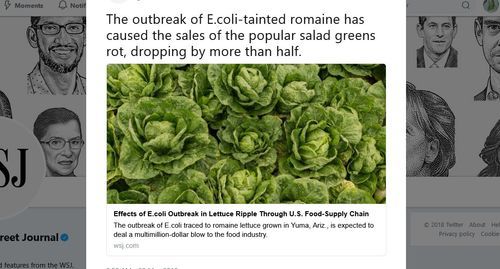 E. Coli Struck Lettuce ACTUALLY Rotting In The Fields—Because Cheap Labor Made It Uneconomic To Pick

The WSJ has an article on the e. coli problem for lettuce growers:

The outbreak of E.coli-tainted romaine has caused the sales of the popular salad greens rot, dropping by more than half. https://t.co/ufBnuSMNEN

A deadly E.coli outbreak tied to romaine lettuce has shaken consumers’ faith in the nation’s favorite salad green, resulting in millions of dollars in losses for growers, retailers and restaurants.

More than six weeks into the outbreak, prices for romaine, historically the most-sold salad green, have dropped by more than half. Grocers nationwide have been clearing it from shelves in hundreds of stores. Several restaurants that served romaine are facing lawsuits from customers, and wholesalers have had to quickly round up kale....

Effects of E.coli Outbreak in Lettuce Ripple Through U.S. Food-Supply Chain
Tainted lettuce is off the market, officials say, but prices have dropped by more than half and some growers have left acres of romaine to rot
By Jesse Newman and Heather Haddon
May 30, 2018

The problem is that illegals from Mexico have what's called "poor worker hygiene" and may not understand--or care--that germs cause disease. This is something I covered (a) last month, and (b) regularly since 2006, if not before.