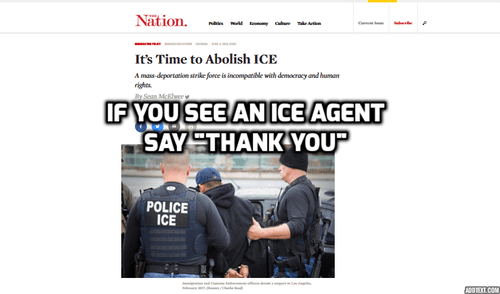 The Left hates Immigration and Customs Enforcement a little bit more every day.

Sean McElwee, [email him] a Leftist writer with a respectable 69 thousand followers on Twitter changed his name on that platform to “abolish ice. send homan to the hague.” some time ago. “Homan” being Tom Homan, the acting director of ICE. Daniel Alarcón, another Leftist writer changed his Twitter name to “Abolish ICE”—and he has 219 thousand followers. Fantasies about doing away with the agency are abound:


Even prominent Leftist journalists and Congressional candidates talk about it:

America has survived for 226 years without ICE. It’s time to abolish ICE.
It’s time to bring 11 million undocumented immigrants into citizenship, adding $1.5 trillion to our GDP, we would accrue $5 billion in additional tax revenue over just 3 yrs! Time to pass the DREAM act now.

And it is easy to understand their hatred; ICE is doing wonderful work. Scanning their press releases invariably brightens my day:

All of these actions took place between May 22 and today—not bad!

Leftists frequently point out that ICE was founded in 2003, and ipso facto is not a necessary wing of law enforcement. (Of course, such logic does not apply to recently founded wings of the government Leftists like, such as everything done under Obama and LBJ.) But the founding date of ICE does much to buttress its effectiveness: In the 1990s, both immigration and crime rates were much higher than they are now. Moreover, how could anybody look at the above headlines and say, “Abolishing this agency must be a political priority”? It’s almost as if many on the Left would rather a greater number of Americans be victimized by violent criminals than have current immigration laws be enforced… but nobody could possibly believe that, right?

So God Bless ICE. If you have a tip, contact them directly: