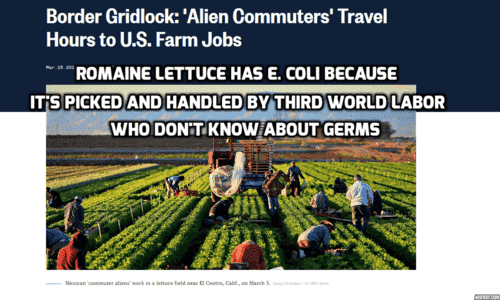 E. Coli And Immigration—Your Lettuce Is Picked By People Who Don't Know What A Germ Is, And Won't Learn

There is a CDC warning about an e. coli outbreak in romaine lettuce picked in Yuma, AZ. Minorities are not “hardest hit” by this, but women are, because men are less likely to say “Oh, I’ll just have a salad”.

70% of those who've gotten sick are female.

Similarly, when leafy greens were the culprit of an E. coli outbreak last year, 67% of those infected were women or girls. In 2016, females were 73% of those ill from an outbreak in alfalfa sprouts, notes the U.S. Centers for Disease Control and Prevention.

The obvious reason for e. coli getting into the food supply—a Third World agricultural labor force picking, handling, and packing the lettuce.

When you Google Yuma Farms Undocumented, you get headlines like this:

The problem—while, as Fred Reed keeps insisting, there's a lot of First World in Mexico, the immigrants picking the lettuce are from the backward parts of Mexico, and many of them have only a fourth-grade education—or less.

They don't understand that germs cause disease.

In 2006,  Baltimore Sun piece asked Who's accountable for E. coli?, and suggested “a modern, integrated food safety system for the United States” needs to be put in place by Congress.

How about this: stop turning over all jobs in food handling and harvesting to people who don't understand sanitation. People who likely have less than a sixth-grade education. 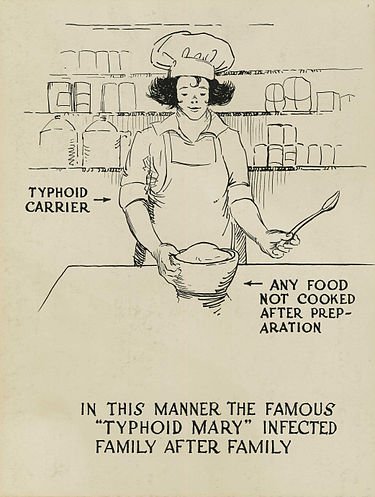 How is that you yourself know about the Germ Theory of disease? Because you learned about it in health class in school, or your parents told you.

Mexican immigrants didn't have those classes, or those parents. How would they know?

According to the Monterey County Herald , and other news sources, one of the possible mechanisms for the latest E. Coli transmission is “worker hygiene.”[E. Coli Dna Matches Cow Manure Salinas Valley: Strain That Tainted Spinach Linked To Cattle Ranch, By Dania Akkad, Octobe 13, 2006 ]

Bad worker hygiene in agriculture is caused by mass immigration's effect on the labor force. N.B. Nothing about this situation would be improved by legalization or guest worker programs.

I suppose that means the USDA is going to go around conducting classes in hygiene in Spanish,. Of course they'll also need to hire Mixtec speakers for the 100,000 illiterate Indians now living in California. As Steve Sailer said

Because wages are so low, there's little need to mechanize farm work in California. And because the state's farm work jobs are so poorly paid for the brutal conditions (three workers died of heat stroke this summer), nobody makes a career out of it if they can. So, the growers constantly suck in to this country more (and ever less educated) illegal aliens. [LA Weekly writer Marc] Cooper notes:

"In a pattern that one academic calls “ethnic replacement,” succeeding waves of ever poorer, more marginal Mexicans, many of them from indigenous communities where Spanish is a foreign language, increasingly constitute the field labor force. The downward-spiraling Mexican economy feverishly churns those waves to the degree that, at any moment, as many as 20 percent of California’s agricultural workers have been in the U.S. for less than a year."

The neocon open border cheerleaders contend that these newcomers will "assimilate" into American culture. Real Soon Now. Yet, these Mixtec-speaking Indians who increasingly make up California's farm workers haven't even assimilated into Hispanic culture in the 484 years since the Spaniards conquered Mexico.

There are two obvious things that would make the food industry more sanitary: English speaking, American-educated employees, and machine picking. These would reduce the other social costs associated with immigrant farm labor, too.

For more, see Invincible Ignorance And Ebola—Why Are We Letting In Immigrants Who Don’t Know What A Germ Is?