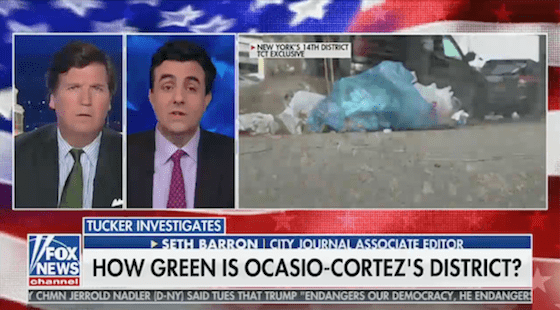 Some on the left may have thought it rude that Seth Barron recently accused Representative Alexandria Ocasio-Cortez’s Congressional district of being a diverse dump, as he claimed on Tucker Carlson’s show on Tuesday.

Barron said a “very high percentage” of residents in District 14 of New York are illegal aliens.

Accurate figures of illegal aliens are hard to determine, but the place certainly is non-American, according to CensusReporter.org, which shows a 2018 number indicating 46.2 percent foreign born — much higher than the US average!

The bigger point was that AOC talks big about the environment but her own neighborhood does not reflect that idea. 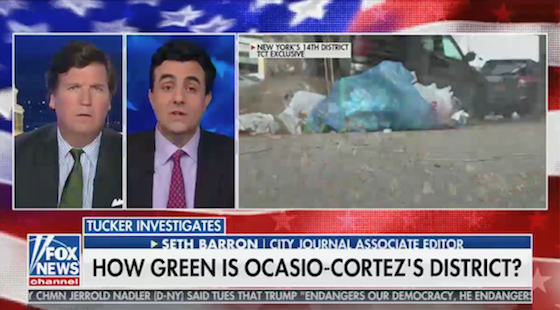 Public orderliness is a cultural value — some tribes embrace it and some do not. I remember reading and reviewing the book “Infidel” by Somali-born Ayaan Hirsi Ali, where she wrote of being impressed with the cleanliness of European cities, after being “used to heaps of stinking rubbish” in Africa.

So it’s not surprising that some immigrants litter the sidewalks and don’t pick up after themselves in public: Perhaps they believe the big government they prefer will provide a worker to clean the streets.

TUCKER CARLSON: We’re connoisseurs of irony on the show. If you claim to care about the environment, you think that the little piece of America you’re responsible for, you represent the Congress would be clean, but hers isn’t. Why?

SETH BARRON: Well, part of the reason is because her district is actually one of the least American districts in the country. And by that, I don’t mean that it’s not part of America, but it’s occupied by relatively few American citizens. A very high percentage of her district is, in fact, illegal aliens.

Now, the way they inhabit housing there is such that they live in a lot of illegal spaces like basements and many people live there. So, they wind up producing a lot of garbage that the landlords don’t want thrown out normally. So hence you wind up with a lot of garbage on the streets. You have illegal food vendors pouring their pig grease into the gutters. Yeah, I mean, I worked out there. It’s — it can be a little gross.

CARLSON: So leaving aside the question of the immigration status of the people there — and as you well know, I think it’s a really important question — but it’s not that hard to pick up garbage off of the street of your own congressional district. How can we take seriously anything she says about the environment when this is her — she should be ashamed of this.

BARRON: Well, even worse I would say than the garbage is the fact that her district in Queens, specifically there, is the epicenter of sex trafficking and fraudulent document sales, basically to, you know, facilitate identity theft. This is acknowledged by advocates and by law enforcement. Roosevelt Avenue is a notorious corridor for sex trafficking and, you know, these are things that presumably —

CARLSON: Wait. In the middle of her district? Her congressional district?

CARLSON: I never hear her mention that. I mean, and she’s all over social media all the time but she doesn’t have time, it doesn’t sound like, to address the concerns of her actual constituents.

BARRON: Her constituents are in a lather about the sex trafficking but you know what? Her solution is to decriminalize prostitution and not arrest johns and not arrest pimps because that would take away the source of livelihood for the — you know, for the immigrants.