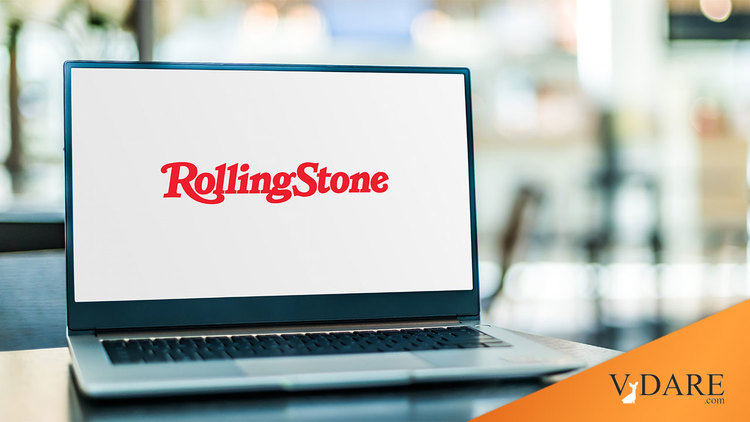 Distrust And Verify When It Comes To "Mainstream" Media Reporting

It was one of those stories that was too good to check from a publication that has made literal "fake news" its stock in trade. Rolling Stone, best known for its "A Rape On Campus" hoax, decided to put out another story with questionable sources [A Rape Hoax for Book Lovers, by Steve Sailer, Takimag, December 3, 2014].

The original title was "Gunshot Victims Left Waiting as Horse Dewormer Overdoses Overwhelm Oklahoma Hospitals, Doctor Says." [by Peter Wade, Rolling Stone, September 3, 2021]. For whatever reason, Rolling Stone and other Main Stream Media outlets are absolutely obsessed with the drug Ivermectin. Ivermectin is a drug used in humans and animals to treat parasites. Some say that it is helpful with COVID-19. The FDA says it should not be used for treating the disease [Why You Should Not Use Ivermectin to Treat or Prevent COVID-19, U.S. Food & Drug Administration, Accessed September 6, 2021].

Obviously, this is an issue of credibility and trust. You can't have that when news outlets may simply be making things up. That's what happened here.

Rolling Stone ran a story that they could've debunked with a single phone call.

They didn't make that phone call because they wanted it to be true and because it went viral and got clicks.

And they'll keep doing it because no one will hold them accountable. pic.twitter.com/Kzl9ksfLEp

Rolling Stone has since "updated" the story. It has not pulled it. Now it has a new title: "One Hospital Denies Oklahoma Doctor's Story of Ivermectin Overdoses Causing ER Delays for Gunshot Victims." In other words, the story was false. Again, you can't read this without Rolling Stone also telling you to subscribe to "Journalism That Matters."

The biggest names in progressive media loved the story and shared it widely on Twitter. MSNBC’s Rachel Maddow tweeted a version of the story to her 10.5 million followers, and the Daily Beast’s Wajahat Ali retweeted the story, adding, “It's like a Biblical horror story. You literally have people denying a vaccine and life to follow their pharaohs towards death.”

The problem is the story was complete fiction.

"An emergency in one rural Oklahoma town is being overwhelmed by people overdosing on ivermectin, the horse deworming medication. It's gotten so bad that gunshot victims, gunshot victims are having to wait to be treated," she said.

The story was also shared by New York Daily News, Newsweek, The Guardian and Insider.

However, the Northeastern Hospital System, which McElyea works for, issued a statement regarding his association with the hospitals reported in the story. The NHS revealed while McElyea "is affiliated" with a medial staffing group, he has not worked at the location in question for 2 months nor has he treated any ivermectin overdoses.

"Although Dr. Jason McElyea is not an employee of NHS Sequoyah, he is affiliated with a medical staffing group that provides coverage for our emergency room. With that said, Dr. McElyea has not worked at our Sallisaw location in over 2 months. NHS Sequoyah has not treated any patients due to complications related to taking ivermectin. This includes not treating any patients for ivermectin overdose," the statement reads.

[Rolling Stone forced to issue an 'update' after viral hospital ivermectin story turns out to be false, by Lindsay Kornick, Fox News, September 6, 2021]

This isn't the only story of this kind. You can't just chalk it up to Rolling Stone not having the highest standards. The Associated Press made a similarly catastrophic mistake. Indeed, one wonders if it was a "mistake" because these kinds of things only seem to go in one direction.

MORE: The AP story that went viral last week claiming that 70% of recent Poison Control calls are related to Ivermectin has now also been debunked. The state says the number is actually 2%. (70% of that 2% relate to the animal version of the drug)https://t.co/xKfY32kDxr

A "correction" from the AP:

JACKSON, Miss. (AP) — In an article published Aug. 23, 2021, about people taking livestock medicine to try to treat coronavirus, The Associated Press erroneously reported based on information provided by the Mississippi Department of Health that 70% of recent calls to the Mississippi Poison Control Center were from people who had ingested ivermectin to try to treat COVID-19. State Epidemiologist Dr. Paul Byers said Wednesday the number of calls to poison control about ivermectin was about 2%. He said of the calls that were about ivermectin, 70% were by people who had ingested the veterinary version of the medicine.

We see this over and over again with reports of fake "hate crimes," where the most ludicrous tales quickly go viral and spread fear and mistrust among Americans. The stereotype of the hard-bitten skeptical reporter is completely false. Cases like the Jussie Smollett hoax, which reporters seemed to have seriously believed, show they are either unbelievably cynical or embarrassingly credulous. I tend to believe it's the former.

Most Americans just read the headlines from news stories [Americans read headlines. And not much else. by Chris Cillizza, Washington Post, March 19, 2014]. Any "updates" or "corrections" fade into the background. Outright hoaxes still serve a political purpose. In the ivermectin case, most will forget that the stories were fake and retain a vague memory that dumb Americans were overdosing from horse medicine when not shooting each other.

We are constantly told about a "threat to democracy" because people don't trust the press. Yet if anything, people aren't cynical enough. At this point, one must regard reports from the Main Stream Media as sensationalized, misleading, or outright false until more information is revealed. There have simply been too many cases where journalists have shown themselves to be either fools or rogues. During a pandemic, when getting accurate information is a matter of life and death, this is a crime beyond forgiveness.

Of course, with immigration, it may be even worse. To truly understand the immigration issue, you need to know about the ways the courts work, the perverse incentives created by bad legislation, the failures of the bureaucracy, and how immigration law enforcement officers are prevented from doing their job. You won't get such reporting from the MSM. You'll just get it from VDARE.com. And of course, the MSM's response to this is simply to demand more censorship.

Unfortunately, I don't think the embarrassing errors by Rolling Stone or the AP will make a difference. The myth that liberals want to believe in is better than the truth. The only solution is for us to build our own media in the face of brutal repression and financial hardship. For that, we need your support. The stakes couldn't be higher, because people will believe the lie if that is the only thing they are offered.