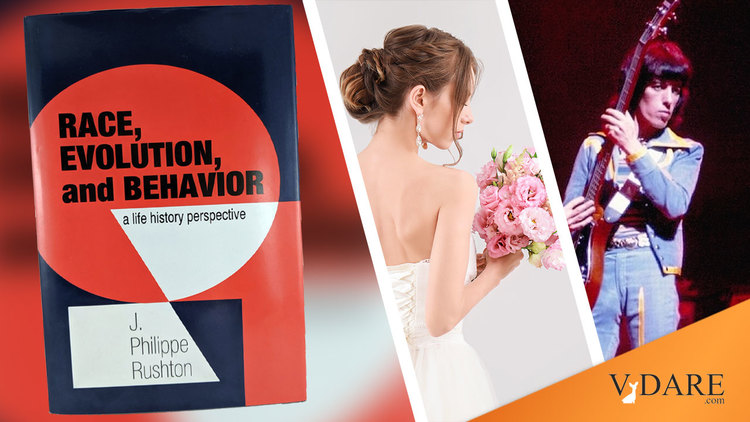 • Double first.  A mighty host of listeners to my September 3rd podcast emailed in to tell me that "double first cousin" is not just a fancy way of saying "first cousin once removed," as I carelessly asserted. It works like this.

Double first-cousin marriage.  Suppose that instead of marrying Philip Moore my sister had married my wife's brother, Hongwei Qi. Their son Marcus would then have grandparents Qi and Derbyshire. If he had then married our Nellie, only two lines of grandparents would have been united, Derbyshire and Qi.

First-cousin-once-removed marriage.  Go back to the first-cousin marriage example; but suppose that instead of marrying Nellie, Marcus had married a daughter Nellie had by a chap named Bernstein. Let's call that daughter Daisy. Since Nellie is Marcus' first cousin, Daisy is his first cousin once removed.  (The "removed" modifier is for when generations get out of sync like this.) Marcus' grandparents, as before, are Moore and Derbyshire. Daisy's grandparents are Derbyshire and Bernstein; so three lines of grandparents again: Derbyshire, Moore, and Bernstein.

I sure hope I've got it right this time. My head hurts.

• Phil Rushton's book.  In the August 27th podcast I urged listeners to poke a finger in the eye of the race-deniers by purchasing a copy of Phil Rushton's book Race, Evolution, and Behavior.  (1) I suggested going to Amazon, but in fact you get a much better deal from Abebooks. (2) For a still better deal, a friend told me that you can read the book for free on Internet Archive, at least for as long as IA can keep fending off copyright lawsuits from publishers.

• No longer rolling.  In that same podcast, August 27th, I implied  that Bill Wyman, who is now 84, is still performing with the Stones. In fact, says a friend, "Bill Wyman quit the band in 1990, though he has performed with them on a few occasions after that date. Wyman's replacement Darryl Jones has played with the Stones since then, though not as an official member of the band."

So hard to keep up.

• Ken Kurson.  A friend thinks I was much too nice about Ken Kurson in my August 20th podcast.  "Snooping on his wife"? My friend offers this from the New York Times of 10/23/2020:

Mr. Kurson's accusers described his conduct as ''diabolical'' and ''super scary,'' according to the criminal complaint.

The friend whom he blamed for his divorce works as a doctor at Mount Sinai Hospital in New York City, according to people familiar with the investigation, and had been friends with Mr. Kurson for more than 20 years.

He targeted her with a flood of negative Yelp reviews [SERIOUS FOR DOCTORS], threatening emails, anonymous calls to her phone and messages to Mount Sinai employees claiming she was having an affair with her boss, prosecutors said. To cover his tracks, he used aliases like ''Jayden Wagner'' and ''Eddie Train.''

The doctor told Mount Sinai that Mr. Kurson had used similar tactics against another woman who was later fired from her job as a result, the criminal complaint said. The woman filed a restraining order against Mr. Kurson.

The woman is Mr. Kurson's ex-wife, according to people familiar with the investigation, though she is not identified by name in the complaint. The people spoke on the condition of anonymity because they were not authorized to discuss an ongoing investigation.

The case is being handled by the public corruption unit of the United States attorney's office in Brooklyn. In a court appearance on Friday conducted by phone, a judge released Mr. Kurson from custody pending trial. He did not have to enter a plea.

The criminal complaint lists five unnamed individuals as victims of Mr. Kurson's harassment. They include Mr. Kurson's ex-wife, the Mount Sinai doctor, her boss and her boss's wife at the time, people familiar with the investigation said. The fifth person could not be determined.

The F.B.I. has gathered evidence that Mr. Kurson also installed software on someone's computer to monitor keystrokes, [THAT’S WAY MORE THAN “SNOOPING”] the complaint said. He used aliases to contact that person's employer to report false allegations of misconduct, according to the complaint.

The criminal investigation began after Mr. Kurson was nominated for a seat in 2018 on the humanities board, a federal body that distributes grants to museums, libraries and other cultural institutions.

The backstory, according to my informant (who is a Stage 4 case of Trump Disappointment Syndrome) is that:

[A high I.Q., wildly impressive Trump supporter known to all my readers] proposed [a high I.Q., wildly impressive Trump supporter unknown to most of my readers — we'll call him Bill] for this precise NIH job. [Bill] filled out mounds of paperwork, and, unlike Kurson is actually qualified for the position. It would have been a great coup to get [Bill] on the board, but he didn’t go to yeshiva with Jared, so Trump never considered him.

To my saying that "the authorities took no action until Trump nominated Kurson for a position on the board of the National Endowment for the Humanities last October," my friend ripostes:

This jackass took [Bill]’s job and when the FBI did the standard background check, they found out about all the complaints against him. THAT’S when and why the feds pursued it—but Trump pardoned all of Kushner’s many, many criminal friends and relatives, so the lazy, good for nothing NYC D.A.'s office stepped in to replicate the action.