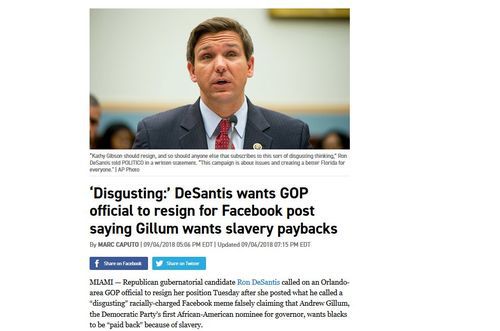 See also: Unless The GOP Learns To Handle Anti-White Race-Baiting Attacks, It’s Done—And So Is The Historic American Nation

A recent poll finds black Democrat Andrew Gillum is building a comfortable lead over white Republican Ron DeSantis in the Florida governor’s race. [New poll shows Gillum leading DeSantis by 6 points, by Tim Swift, Local 10, September 19, 2018] As Conservatism Inc. never ceases to remind its dwindling constituency, Gillum is, like other Democrats this election cycle, essentially a socialist, and DeSantis is a “Reagan conservative”.  [For a Florida Governor, It’s a Reagan Conservative vs. a Sanders Socialist, by Neal Freeman, National Review, September 5, 2018] But it’s not 1980 anymore and Gillum’s campaigning for what Governing’s Graham Vyse correctly calls “key Democratic Socialist priorities” isn’t scaring away voters. [How Democratic Socialists Performed in State and Local Primaries, September 20, 2018] The truth is that politics has changed, campaigns are now about identity and demographics, and DeSantis, like the Stupid Party generally, has no idea how to handle it.

Thus DeSantis is currently plagued with yet another case of what the System Main Stream Media terms a “racial controversy.” A supporter, Steven M. Alembik, tweeted “F--- THE MUSLIM N-----” after a typically sanctimonious Barack Obama speech, leading the DeSantis campaign immediately to perform a full grovel. This was particularly stupid because Alembik is Jewish (“I grew up in New York in the ’50s. We were the kikes. They were the n------. They were the goyim. And those were the spics”.) and an adroit defense of him, for example attributing his hostility to Islam to his obviously passionate concern for Israel, would have helped DeSantis with a powerful Florida constituency. [New racial controversy batters DeSantis, by Mark Caputo, September 20, 2018]

And as Politico’s Marc Caputo gloats, this is only the latest “racial controversy” of DeSantis’s campaign, with the first being when DeSantis used the phrase “monkey this up” about the likely effect of DeSantis’s economic policies. Caputo intoned:

[T]he pattern of racial controversies, including the Alembik remarks, highlights a problem that is getting harder to overlook in this racially diverse swing state: Despite DeSantis’ denunciations of bigotry, this is the fifth-race related issue concerning the candidate, the campaign or one of its supporters to erupt since the start of the general election campaign.

The passage is revealing, though not in the way Caputo intends. The reality is this: Because the Democrats have nominated a black candidate, everything DeSantis says or does is going to be called “racist,” no matter how energetically he “denounces bigotry.”

What’s more, just as the Republican Establishment’s refusal to fight back against the disgusting attacks on Roy Moore ultimately enabled the current smear against prospective justice Brett Kavanaugh, each grovel by DeSantis simply enables the next attack.

For example, DeSantis called on Kathy Gibson, an Orlando-area GOP official, to resign for a “disgusting” Facebook post that suggested Gillum was seeking reparations: “Andrew Gillum says when he wins governor of Florida… ‘his people’ will be getting ‘paid back’ for slavery. [‘Disgusting’: DeSantis wants GOP official to resign for Facebook post saying Gillum wants slavery paybacks, by Marc Caputo, Politico, September 4, 2018]

But while Gillum is not technically part of the Democratic Socialists of America, he did not disavow their support and the DSA does support reparations for slavery. [Are the Democratic Socialists of America For Real? By Kate Aronoff, The New Republic, August 7, 2017] And reparations is also taken for granted as desirable among Leftist journalists and chattering classes. [The Case for Reparations, by Ta-Nehisi Coates, The Atlantic, June 2014]

Thus it would have been very easy for DeSantis to say that it’s a legitimate question whether Gillum, like the DSA, supports reparations [DSA voters for BDS, Reparations, and Out of the Socialist International, by Juan Cruz Ferre, LeftVoice, August 5, 2017].

Of course, it’s also hypocritical for DeSantis to be demanding people resign for Politically Incorrect Facebook posts when DeSantis himself was exposed as the administrator of a Facebook group that posted offensive memes and had to lamely say he didn’t know he was part of it. [Did Ron DeSantis moderate a far right Facebook group, by Emily Mahoney, Tampa Bay Times, August 31, 2018]

DeSantis’s breast=beating disavowals certainly did not get him a single vote, probably discouraged his white base, and will inevitably encourage the next Main Stream Media hit piece.

Just hoping that voters will notice Gillum is aligned with ideological extremists isn’t going to work when the System media/ Democrat Enforcers are on a hunt for every single staffer, supporter and well-wisher of DeSantis who has ever said anything Politically Incorrect. DeSantis will be stuck disavowing his own supporters until election day. He is even being called to account for robocalls he had absolutely nothing to do with. [White supremacist group’s robocalls target Florida governor candidate Andrew Gillum, by Alex Seitz-Wald, NBC News, August 31, 2018]

Nor is pointing to the FBI’s investigation into Gillum for corruption going to be effective—because the System media will not give the story the same kind of obsessive coverage they do if a DeSantis supporter says a mean word on Facebook. [FBI probe casts shadow Florida Democratic gubernatorial candidate Andrew Gillum, CBS, September 4, 2018]

Dylan Scott argues in Vox that “Democrats and Republicans are both running on identity politics” [September 21, 2018]. Yet this isn’t really true. Nationally, rather than taking strong action on immigration, President Trump and the GOP Congress seem content to lie back and assume the strong economy will somehow let them keep control. [Kudlow: Economy will help GOP keep its grip on House, by Ben White, Politico, August 14, 2018] Even Trump himself is forever crowing about low black unemployment rates, to the utter indifference of African-American voters. A recent poll suggests 93 percent disapprove of him and 80 percent support impeachment. [Poll: Disapproval of Trump, impeachment support highest with black voters, by Lissa Poirot, Philadelphia Tribune, August 31, 2018]

In Florida specifically, while Gillum is advancing bold (whatever one thinks of them) proposals such as “Medicare for all,” DeSantis is recycling the same tired slogans about “cutting bureaucracy” and “school choice” that Republicans have been hearing for decades. [Ron DeSantis education plan: Cut bureaucracy, back school choice, by Gray Rohrer, Orlando Sentinel, September 18, 2018] He is making no explicit appeal to Florida’s white majority.

To some extent, DeSantis is at a disadvantage because of recent demographic change. Democrats are benefiting from a huge wave of Puerto Rican Failure Migration in the aftermath of Hurricane Maria and that commonwealth’s incompetent Third World government. Of course, like dependents everywhere, these Failure Migrants will likely vote to install the exact same system as the one they just escaped. Democrats gleefully expect Puerto Ricans to tip the balance in the Sunshine State. [Puerto Rico hurricane migrants may be wild card in U.S. elections, by Sebastien Malo and Adriana Brasileiro, Reuters, March 28, 2018]

DeSantis can still win by turning out white voters and pushing back aggressively against media bias. However, just as he’s succumbing to MSM narratives again and again, he’s also unilaterally disarmed himself on the immigration issue, and likely suppressed white turnout, with his choice of an anti-Trump Hispanic running mate, Jeanette Nunez.  She once tweeted Donald Trump was a “conman” and suggested he supported the Ku Klux Klan and also supported in-state tuition for illegal immigrants. [Ron DeSantis’ running mate Jeanette Nunez once called Trump a ‘con-man.’ Here’s what you need to know, by Skyler Swisher, Sun Sentinel, September 6, 2018]

If picking her was supposed to prevent the MSM from calling DeSantis racist, it has clearly failed. But how can he now campaign against illegal immigration (although it makes a desultory appearance on his webpage)?

In a ferociously anti-white piece in UVA Hoax magazine Rolling Stone, homosexual scalawag hack Bob Moser joyfully notes that the South has become “increasingly diverse” and thus Democrats can dispense with the centrist posturing that fooled the naïve white rubes in the past: “The Republicans have no clue—I mean, none—how to counter the rise of Southern Democrats,” he crows. [How the South’s New Progressives Are Taking On the GOP, September 19, 2018]

Which is not wrong, though it’s more accurate to say that Republicans have no idea how to counter race-driven controversies in an age of identity politics. Instead, they immediately surrender.

The great irony: they would have a clue if they just looked at how President Trump won in 2016. He campaigned something like the real Southern Democrats of the past by appealing to working class voters, dispensing with wonkish rhetoric about free markets, talking tough on immigration and identity, and never giving an inch when it came to the media.

Unfortunately, since taking office, President Trump has largely governed like just another Republican. Now, in Florida, DeSantis is campaigning like one.

Unless he changes, it’s going to cost him—and, ultimately, America—everything.