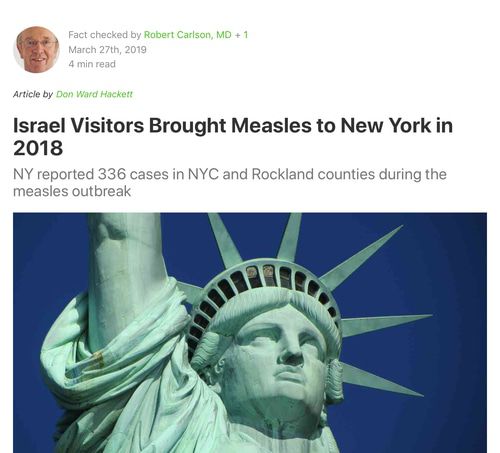 Rockland County, which is located a little over thirty miles north of New York City, just declared a state of emergency over a measles outbreak.

So far this year, more than 300 people have contracted measles in 15 states in the U.S. Almost half of those cases occurred in Rockland County, just north of New York City. Because of the outbreak, which has lasted nearly six months, county officials have declared a state of emergency and are banning anyone who is unvaccinated from frequenting public places. [NY County Declares Emergency Over Measles Outbreak, by Carol Pearson, Voice of America, March 28, 2019]

This incident is only the latest high profile news stories making vaccinations into a hot button topic. New York Democrats are intent on introducing a new law which would allow minors of a certain age to choose to be vaccinated even if their parents objected and there are also calls to severely restrict or outright end the ability for parents to claim exemptions from mandatory vaccinations. The Democrats seem to be emboldened to take a strong stand against "anti-vaxxers" based on recent polling which shows that most voters support mandatory vaccinations.

Nearly 80 percent of New Yorkers in a new poll said vaccinations should be required for kids before they can go to school, regardless of family religious beliefs. Support for required vaccinations is strong among Democrats, Republicans and independents, according to the latest Siena College poll. Over 75 percent of Republicans, 86 percent of Democrats and 70 percent of independents were in favor.[New Yorkers in poll want mandated vaccines, regardless of family religious beliefs", Kevin Tampone, Syracuse.com, March 18, 2019]

This public perception is partly due to the fact that the media is working overtime to vilify anti-vaxxers as a threat to public health.

While we fret about rising sea levels, the threat posed by Russia and the implications of having a lunatic in the White House, coming in from the blind side it’s going to be the anti-vaxxerswho end up killing us all. [Forget Trump – anti-vaxxers are the clear and present danger", Emma Brockes, The Guardian, March 28, 2019]

In their rush to condemn anti-vaxxers, the Democrats and the media want to portray Christian fundamentalists and conspiracy theorists similar to Alex Jones as the cause of the current epidemic in Rockland County but the truth is that measles outbreak was caused by immigrants from Israel who were infected when they arrived in America and then spread it to the densely populated and unvaccinated Orthodox Jewish community in the region.

As of March 27, 2019, there have been 155 confirmed measles cases of in Rockland County, NY. This outbreak can also be traced back to October of 2018 when an international traveler arrived in New Square with a suspected case of the measles. New Square is an all-Hasidic village in the town of Ramapo, located in Rockland County, NY... Across the world in the State of Israel, between March 2018 through January 31, 2019, more than 3,400 individuals were confirmed infected with measles. The Israel government says this measles outbreak is a result of the virus being imported to Israel by visitors, who later infected un-vaccinated populations. Unfortunately, the measles outbreak in Israel is still ongoing... To stop this worldwide measles outbreak, the CDC says under-vaccinated international travelers are the leading source of the measles virus and need to get vaccinated. [Israel Visitors Brought Measles to New York in 2018," by Don Ward Hackett, PrecisionVaccinations.com, March 27, 2019]

The Republicans in the state seem completely oblivious on how to respond but it should be obvious. Based on the undisputed fact that this outbreak was caused by immigrants and that New York is a sanctuary state under Governor Andrew Cuomo, the two issues should be tied together.
If Rockland County is banning all unvaccinated citizens from public spaces then why can't the state also ban immigrants from entering the state who are unvaccinated or, even worse, actually infected with diseases?
This would flip the debate around and put the Democrats on the defensive explaining why U.S. citizens in the state must be compelled to follow strict vaccination laws but immigrants are free to wander in and out of the state with zero oversight. I'm not holding my breath waiting for such a proposal though since the Republicans in New York are completely cucked.