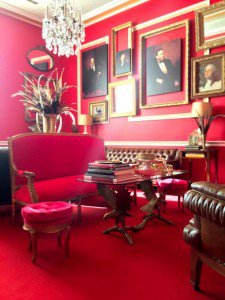 I see James Fulford in effect gave Congresscritter Aaron Schock the benefit of the doubt in Another Day, Another White Guy Fired (By A Cowardly Republican) For A Facebook Post

This is wrong, I think: Schock appears to be following the following the old adage “Dress British, Think Yiddish” frequently heard when I was first on Wall Street 40 years ago (no doubt superseded now).

Exhibit A for the first component of this was supplied by the Washington Post He’s got a ‘Downton Abbey’-inspired office, but Rep. Aaron Schock won’t talk about it. By Ben Terrie Feb 2, 2015

Bright red walls. A gold-colored wall sconce with black candles. A Federal-style bull’s-eye mirror with an eagle perched on top. And this is just the Illinois Republican’s outer office.

“It’s actually based off of the red room in ‘Downton Abbey,’?” said the woman behind the front desk…Annie Brahler, the interior decorator whose company is called Euro Trash…guided me to Schock’s private office, revealing another dramatic red room. This one with a drippy crystal chandelier, a table propped up by two eagles, a bust of Abraham Lincoln and massive arrangements of pheasant feathers…

Brahler offered her services for free, according to Schock’s office, although he had to pay for the objects.

Considering the extreme grunginess of most Congressional offices the monumental lack of taste and political sense in upstaging his more penurious colleagues suggests WASPish reticence was not included in Schock’s style makeover.

The second segment of the proposition was first noted by us in 2013 when Schock was found declaring for Amnesty followed by Citizenship in La Raza type terminology: A Virginia Reader Spots A GOP House Sellout—Aaron Schock (R-Whitopia) Volunteering To Pass The Dream Act With “Bipartisan” Support. This stimulated a fine CIS polemic which I applauded in Schock Socked: Devastating CIS Critique of Turncoat from Illinois-18th

Apparently the threat of a Primary subsequently kept Schock’s NumbersUSA ranking in line with the Illinois GOP delegation.

But this despicable sacrifice of an employee for merely being candid about black behavior shows Schock's true loyalty is to his NeoConservative paymasters. Their priority #1 (as with Trayvon Martin): not even an implicit defense of the historic American Nation – much less its values – will be tolerated.

To adapt Congresscritter Yarmuth’s observation: that is the side on which the money is.

How about some investigative reporting on Congresscritters' homes?